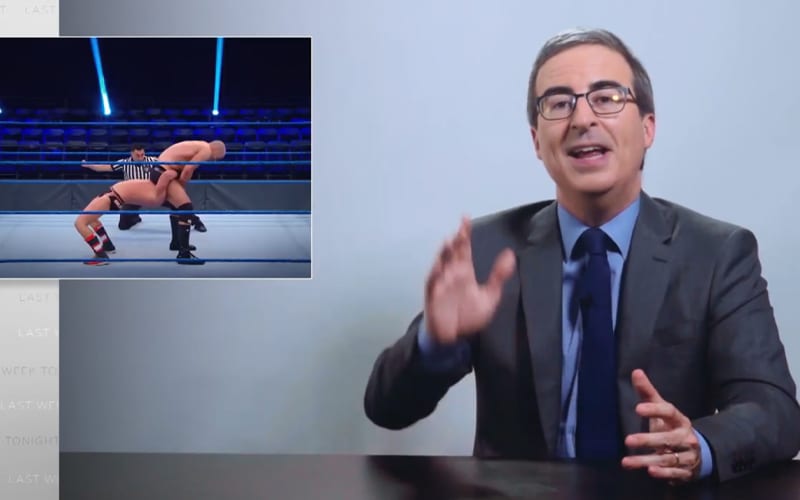 The state of Florida considered WWE and any other sporting event as an essential service. WWE didn’t have to miss a show and John Oliver noticed.

HBO’s Last Week Tonight has focused on WWE in the past. Their relationship with Saudi Arabia was a big aspect of one episode. John Oliver’s show even dedicated an entire episode to WWE and how they treat their employees.

This week’s main story on Last Week Tonight focused on sports reopening during a pandemic.

Oliver brought attention to the anonymous letter that a WWE employee wrote to Orange County authorities begging to shut them down. Then Oliver played a clip from Vince McMahon during the last investors call where he said:

“I think new content is always a driver in terms of stimulating interest and what have you and obviously, everyone is pretty much starved for new content. It could very well be that they’re tired of watching Netflix and you want to see, you know, strong men running around in their underwear.”

Oliver stated that the risks outweigh the benefits of running WWE programming. He also used Vince McMahon’s comment to transition into hitting on Adam Driver. The show did not mention WWE’s one positive COVID-19 test so far.

Last Week Tonight also mentioned how AEW is running events, but they didn’t go into them at all. Oliver also didn’t mention how AEW and UFC are doing actual COVID-19 testing while WWE is not. He did spend some time discussing UFC’s Fight Island, and he mentioned the positive coronavirus testing that UFC experienced.

You can check out the video below to see everything that John Oliver had to say about sports reopening during a pandemic. What do you think about what he said? Sound off in the comments below!