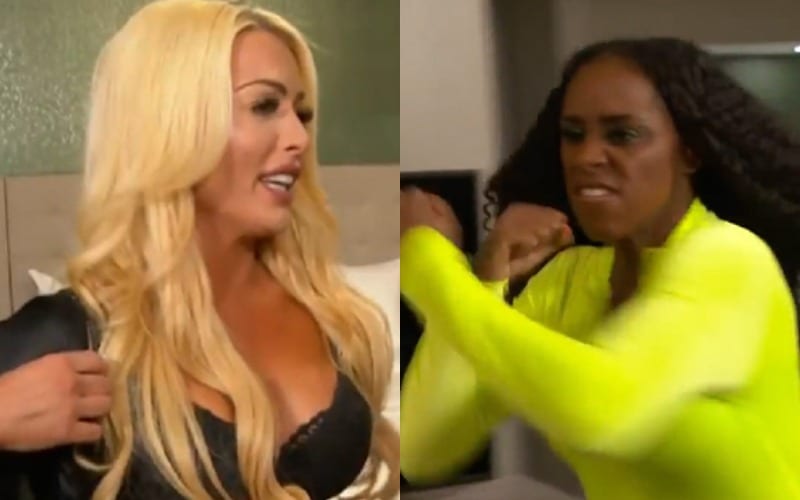 Naomi and Jimmy Uso are a WWE couple that has been able to make it work. It can’t be easy working on the road all the time as WWE Superstars, but as Total Divas has shown they figured it out. However, Mandy Rose would like to get in the middle of their relationship.

On WWE SmackDown Live this week, Mandy Rose gave Jimmy Uso a hotel room key and invited him to come up and see her sometime. This resulted in Uso going to her hotel and turning her down. Then had a paparazzo jump out and take a few pictures of her in lingerie while Jimmy just standing there.

He rejected her and then Naomi showed up and brawled with Rose all over the hotel room. It was a segment that reminded us of something WWE would have done a decade ago, but it happened in 2019.

This riskier segment was much like the segment WWE booked for Alexa Bliss on Raw where someone accidentally walked in on her while she was changing. The video of Bliss’ accidental exposure blew up on YouTube and went viral. Currently, it’s sitting at 3.2 million views.

It looks like Naomi and Mandy Rose’s brawl is doing very well too and could be right up there with Alexa Bliss’ segment on Raw. Currently, the hotel room brawl video has 809,000 views and it has been up for around 10 hours. This was about the same place the Alexa Bliss video was at this time yesterday.

Currently, Rose and Naomi’s video from SmackDown Live is leading all other videos from Tuesday night by a very, very wide margin. You can see a screenshot of WWE’s YouTube videos below to see the comparisons. Only time will tell if this means WWE will be slipping back into their TV-14 ways, but the fan reaction certainly isn’t a deterrent.