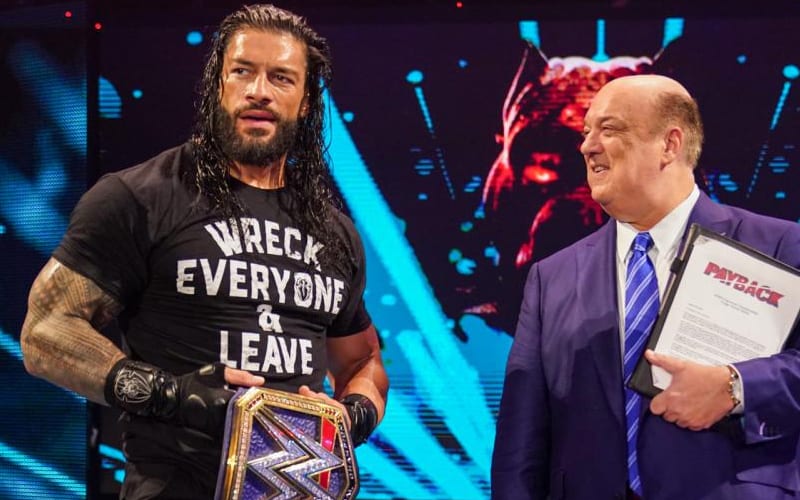 Roman Reigns took months off at home in quarantine during the start of the COVID-19 pandemic. His big SummerSlam return in the ThunderDome made headlines. Not a week later, he shocked the world again by revealing his alliance with Paul Heyman.

A lot of things played into Roman Reigns’ return to WWE. Ringside News previously reported how Reigns and Vince McMahon kept in constant contact during his hiatus, but his return was a total surprise for everyone in WWE.

While speaking to Corey Graves on After The Bell, Roman Reigns revealed why he teamed up with Paul Heyman. Not only was it something that he wanted to do, but it was also something WWE used as a “lure” to get him to make a return.

“It’s just something I wanted to do. I mean it was an opportunity to be able to connect a lot of dots. It was kind of a lure I guess to get me back in, but it was for me to know I wanted to go down this route I just felt like I needed something. I didn’t want to just show up and look different and talk different. I wanted a whole new presentation and we’re gonna continue to gradually do that, but I thought you know what better way than to align myself with essentially a high-powered attorney.”

“If you took a top athlete in the world and mixed them with a mafia boss character, that’s who I am you know what I mean? I’m the mob boss who will go out there and do the hit himself.”

“You’ve gotta have someone who’s dotting the i’s and crossing the t’s for you. You gotta have somebody who understands the ins and outs and somebody who can add to that whole character build for it when it comes to the personality. Not just for me in general, but for the organization is trying to do so it’s really cool to work with Paul.”

WWE sought out to do something very different with Paul Heyman and Roman Reigns’ relationship from Brock Lesnar and his Advocate. Heyman is the Special Counsel to the Tribal Chief, and that will come with many changes. It’s also not very likely that Reigns will drop his Universal Title any time soon, but you never know what to expect in WWE.