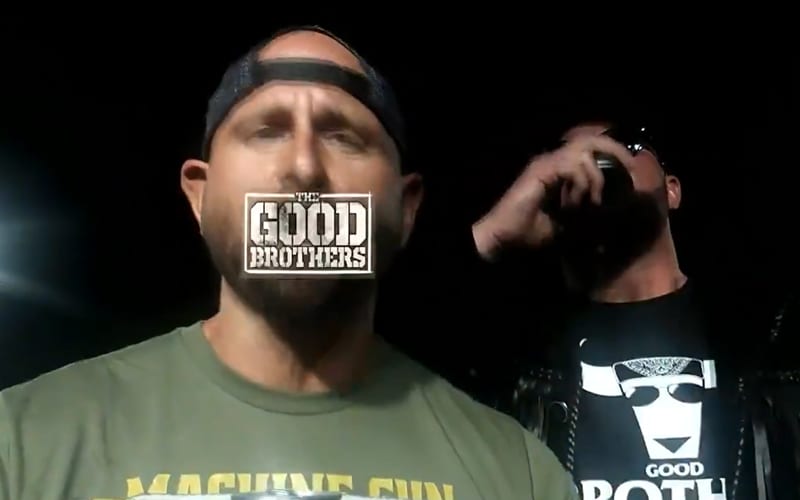 Luke Gallows and Karl Anderson were supposed to go to AEW last year when their contracts with WWE came up. However, the Tag Team decided to stay with WWE after both AJ Styles and Triple H convinced them to do so.

The Good Brothers revealed on their Talk n’ Shop: Countdown to F#cktown podcast that their decision to not go with AEW didn’t sit well with a certain friend of theirs who is a wrestler in position of power in the company.

That man might be the former AEW Champion Chris Jericho, according to a report.

Chris Jericho revealed in a QnA Session on his YouTube channel that not only were Anderson & Gallows AEW bound but they were intended to be the original members of The Inner Circle.

He said that although he is very happy about how the faction has been incredibly successful in the company, initially he didn’t have a proper history with any of the members.

I’m very happy for them. They did a great podcast this week, Talk’n Shop, talking about kind of the whole controversy about when they went back to WWE after we had discussed them coming to AEW for a few months. The Young Bucks, myself, [and] Kenny Omega, kind of convinced Tony Khan that they’d be excellent in AEW and one of the ideas at one point was to have Gallows and Anderson in the Inner Circle. Let me just say, I love the Inner Circle. I think we really stumbled onto something great. But keep this in mind, I knew Jake Hager, but I hadn’t seen him or work with him in years and never had met Santana and Ortiz other than my cruise where we crossed paths briefly and I didn’t know Sammy Guevara at all. So basically having me and Jake had some history and some good matches and some good times, but nothing with the other guys. So you’re sticking. It’s like forming a band with five separate guys that you haven’t even met, you know? Here we are now, one of the best, I think, one of the best factions in wrestling history and we’re only not even a year in. So I’m very proud of the work that we’ve done together and I think there’s a lot more to come.

The Ayatollah of Rock n’ Rolla went on to say that he is very excited to see what Gallows & Anderson bring to the table at IMPACT and eventually in NJPW. He also said that it is a good thing that both men are owning up to the fact that they made the wrong decision by not signing with AEW and staying with WWE.

Jericho said that the two men did what was best for their families and he understands it’s all business, although it didn’t turn out well for them. Y2J said that he will be watching Talk n’ Shop A-Mania and that he is proud and happy for the Good Brothers.

“So I’m very excited to be working with those guys and we have a lot of good stuff coming up. But anyways, Anderson, Gallows, I’m very excited for them. They’re owning the fact that they made the wrong decision and they went to WWE instead of AEW. Business is business. They did what they thought was best for them and their families. They kind of got screwed because of it. These guys are so funny. The two the funniest guys I’ve ever met, and they’ve already got IMPACT. They’re going to go back to New Japan, they’ve got the podcast, Talk’n Shop, they’ve got Talk’n ShopaMania which is going to be a total waste of time. I’m still going to watch it, but I’m proud of those guys and happy for those guys.

Gallows & Anderson made their IMPACT debut at last night’s Slammiversary. The two men will be participating in a “Boneryard Match” at their Talk n’ Shop A-Mania event on August 1st.

Thank You to Fightful for the quotes.