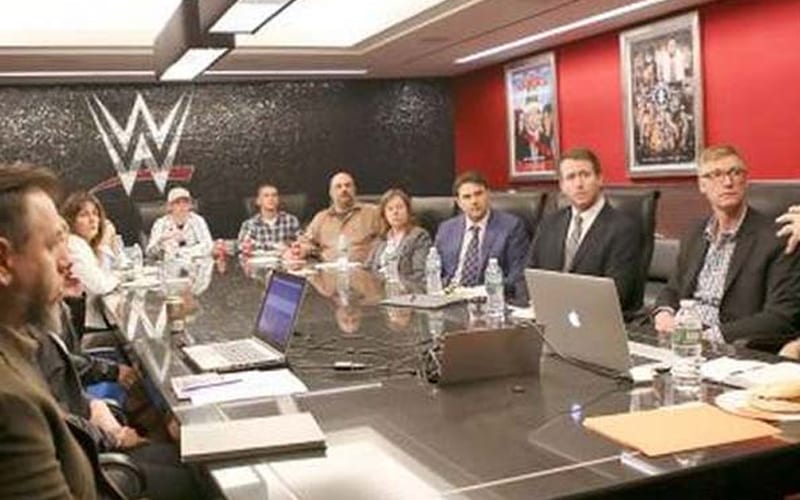 There are a lot of moving pieces to consider when WWE puts together their weekly scripts. The process is also a bit complicated.

WWE programming and the process in which it is written has evolved through the years. Paul Heyman’s exit from his Executive Director of Raw position caused another change in practice backstage.

Ringside News recently reported about the status of the Horror Show at Extreme Rules script. They weren’t done with it yet and could be cutting it close. This caused some of our readers to ask more about the script writing process.

We have been told by a current member of the writing team that scripts for Raw are written mostly by Ryan Ward and Jon Baeckstrom. Ed Koskey has been getting more involved in the booking of Raw as of late, but that could be because Vince McMahon can decide to talk about Raw with Koskey if he chooses.

Once the script is completed the assignments are sent out to writers via a business communication platform they use called Slack. It’s essentially a professional chat room and messaging service. The writing staff will then contribute ideas and write promos.

We were told that Koskey has a more “interactive method” with the SmackDown team. One source in the company said Koskey works differently with his team because “Koskey knows how to work with people more than Ward or Backstrom.”

Prichard does more overall booking direction, and “sometimes gets into the nitty gritty.” More often than not, it’s Koskey on SmackDown, Ward and Baeckstrom on Raw who are leading the pitch of the individual segments.

In the end, everything still needs to be approved by Vince McMahon before making it on television. We have heard plenty of stories about McMahon ripping up scripts on the day of a show. Now you know what kind of effort it takes to come up with that content.

Once Koskey, Ward, Baeckstrom and their teams have the shows ready, the shows are reviewed by Vince, who then makes changes or sometimes changes everything.