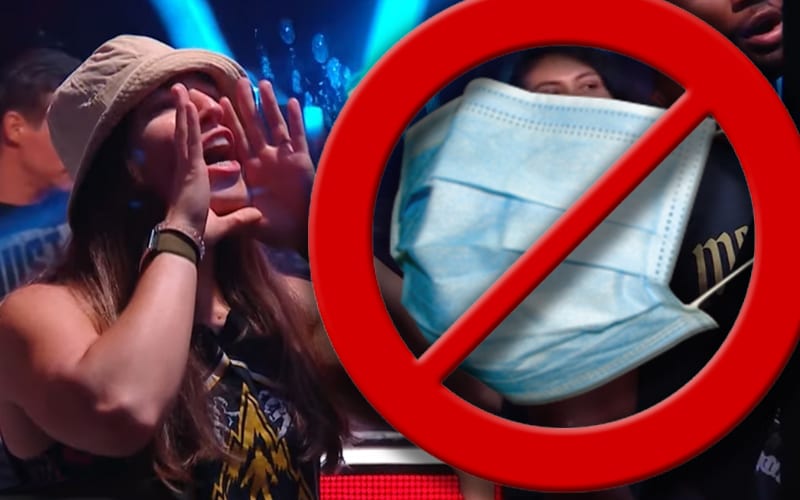 WWE didn’t want their fans wearing masks on television. Orders were sent down to have fans remove their masks. This situation has now received special attention from WWE.

The company released a public statement on the matter about fans wearing masks at their television tapings. The company explained that fans at the tapings had to go through a medical screening.

It was also explained in the release that fans were kept apart from each other during the taping. It was then asserted that “face masks were not required.”

“Fans have not been in attendance at WWE events since March 13. Yesterday, a select number of friends and family were permitted to attend WWE’s TV production. These individuals were required to participate in medical screenings prior to entering the closed set at our training facility, and were kept apart from in-ring performers and production personnel. Attendance was below 20% capacity and social distancing guidelines were adhered to with at least six feet between parties, thus face masks were not required.”

Kevin Dunn was shouting orders to WWE security during the tapings to have fans remove their masks. Obviously, they had a reason for wanting to keep them on. The fans also had to sign waivers before entering the Performance Center which removed any liability from WWE if a fan contracts COVID-19.

WWE Superstars and staff all had to get COVID-19 tests done today. A positive test was discovered in their developmental system. They are getting swab tests and Mojo Rawley revealed his test in a video post.

It should also be noted that some WWE Superstars were pretty uncomfortable about fans not wearing masks. They didn’t even know that actual fans would be in attendance until they read about it online.