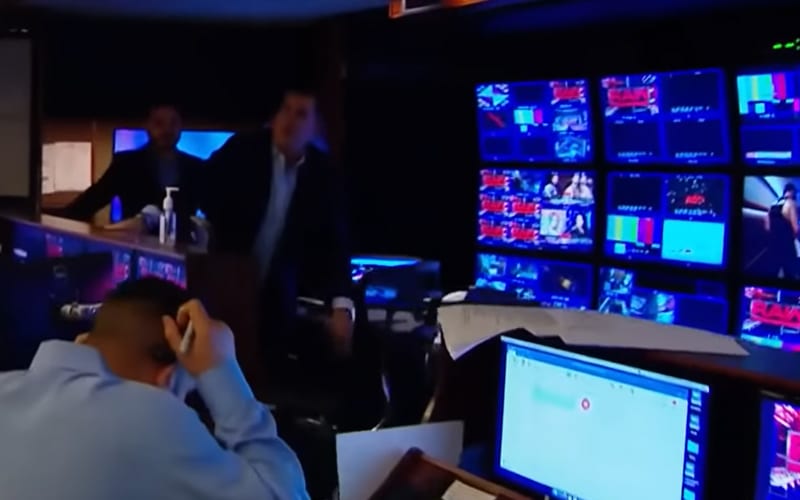 WWE surprised a lot of people during Raw this week. Live fans were shown in the crowd who were not WWE NXT Superstars. They also weren’t allowed to wear masks.

Friends and family of WWE were given special invitations to attend the tapings. They also had a sign a waiver which removed any liability from WWE if they contracted COVID-19.

Minutes after Raw was over, the news dropped that there was a positive test in the company. This led to Ringside News’ exclusive report that WWE is moving today’s scheduled television tapings to Wednesday so everyone can get tested for the novel coronavirus.

Ringside News has learned that Kevin Dunn was pointing out fans in the crowd during the television tapings. Security was then ordered to have the fan remove their mask.

It was specifically told to us that Kevin Dunn was “flagging people to security and over the loud speaker system if they were wearing masks.” It was also noted that WWE’s no mask policy might not have been 100% on Vince McMahon.

It’s unknown if Kevin Dunn suggested that fans shouldn’t wear masks and Vince McMahon simply backed him up. There are a lot of conversations that only Vince McMahon and Kevin Dunn are privy to.

Kevin Dunn might have suggested no masks and Vince McMahon simply backed up this decision.

In case you didn’t know, Kevin Dunn is a fixture in WWE. He’s been with the company since 1984 and currently serves as Executive Vice President, Television Production. This is a role he’s had since 2003. He joined WWE’s board of directors in 2008. Some fans might remember Dunn best from stories that Jim Cornette tells about him where he refers to Dunn as “Bucky Beaver.”

The real point is that WWE now has a policy that fans are not allowed to wear masks. Let’s see if they change their minds on that. They could always give out official WWE masks for some additional product placement.