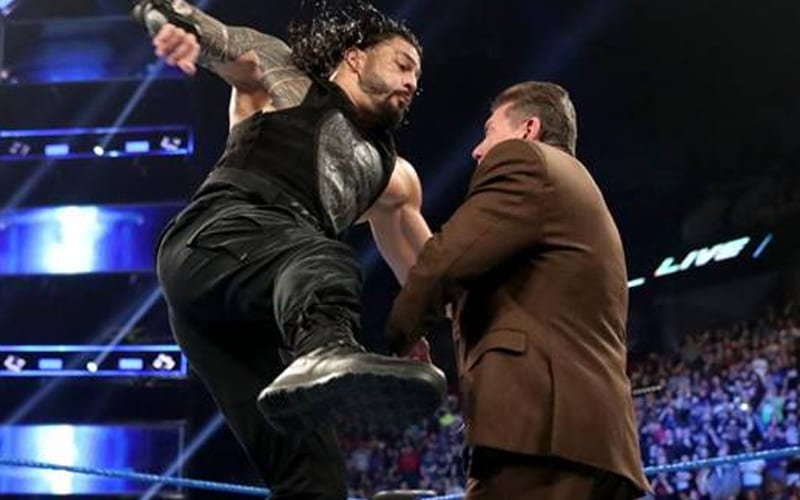 WWE is now selling masks with different Superstar designs. Roman Reigns was not one of the options for fans. The situation with Roman Reigns and WWE is not a work. He really went home during a pandemic.

Reigns was nixed from a WrestleMania clip during RAW this week. Vince McMahon also sent down word to not include The Big Dog in any verbiage on television.

WWE’s digital department is still featuring Roman Reigns in videos, but he’s not appearing on television. The fact that WWE released 15 different face masks and Roman Reigns isn’t one of them could be a very telling sign.

Bryan Alvarez remarked on Wrestling Observer Live that Vince McMahon’s opinion of the coronavirus has likely caused him to hold a grudge against Roman Reigns.

“They waited until the very last minute kicking and screaming to cancel these shows [in March]. Then, of course when they cancelled these shows as much as they could it was business as usual. They’re gonna run live every week and no matter how much criticism they were just going to [continue] — what does that tell you?”

“You know what it tells me? It tells me they think this whole thing is BS. They think this whole coronavirus is the flu — maybe [they think] it’s not as bad as the flu. You know, Vince is out there, he’s 74-years-old. He’s running around like a crazy person, he’s not sleeping. What it tells you is that he doesn’t take this seriously at all. That’s why he’s mad at Roman Reigns.”

We’ll have to see if and when Roman Reigns comes back to WWE television. Right now he’s not even appearing in segments that he was actually a part of.

Do you think Vince McMahon has a right to be upset at Roman Reigns? Sound off in the comments below!