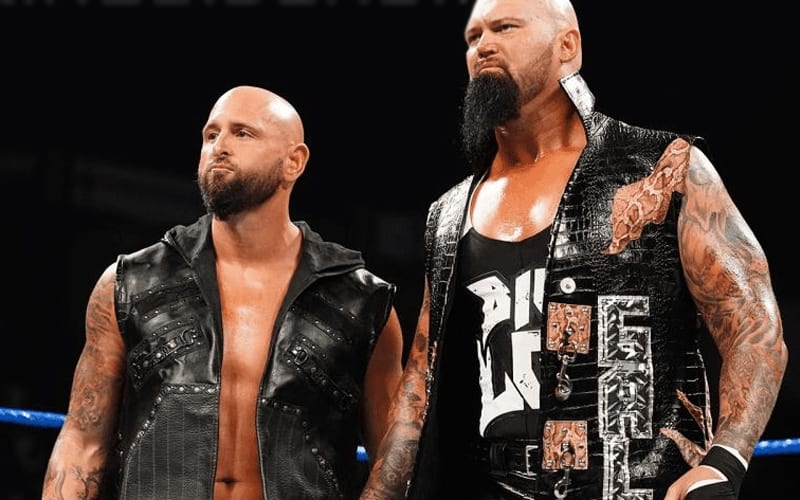 Luke Gallows and Karl Anderson were cut from WWE months after signing new five-year deals worth $750,000 each per year. Now they will have to carry on after WWE.

During Talkin’ Shop, The Good Brothers opened up a little bit about the recent wave of releases that they were a part of. When it comes to the layoffs, Karl Anderson said that everyone who got cut were friends, and not one person was disliked.

“A lot of times when you see these things come out, like, as guys in the business we’ll go, ‘Yeah, f*ck him a little bit.’ But I can honestly say on that list there was nobody that I genuinely didn’t like.”

Luke Gallows spoke about supporting those Superstars who were recently released. WWE cut over one hundred other employees that some fans might never realize.

This was a huge round of cuts, but they must do their best to carry on. There are still ways to support those Superstars because many of them got merchandise up on Pro Wrestling Tees rather quickly.

“As we said, it was a crushing day in the professional wrestling world. But the professional wrestling world always goes on. So please support these guys, follow their social media, go to their Pro Wrestling Tees stores. Show them some love. Because when the world opens back up, you’ve got a bunch of brothers who are coming at you and it’s gonna be so damn entertaining, and I can’t wait to see where everybody lands next.”

Luke Gallows then confirmed that the Good Brothers will stick together. This is something that a lot of people assumed, but now it is confirmed.

The next few months could be very interesting. Hopefully, things will clear up enough for indie wrestling to start again so we can start seeing what these recently released Superstars will do next.

Gallows might be a bit guarded about revealing their next move. Karl Anderson was a bit more direct as he dropped a video saying that The Machine Gun is back, and he’s headed to Japan.

What do you think Luke Gallows and Karl Anderson are going to do next? Sound off in our new and improved comments section!