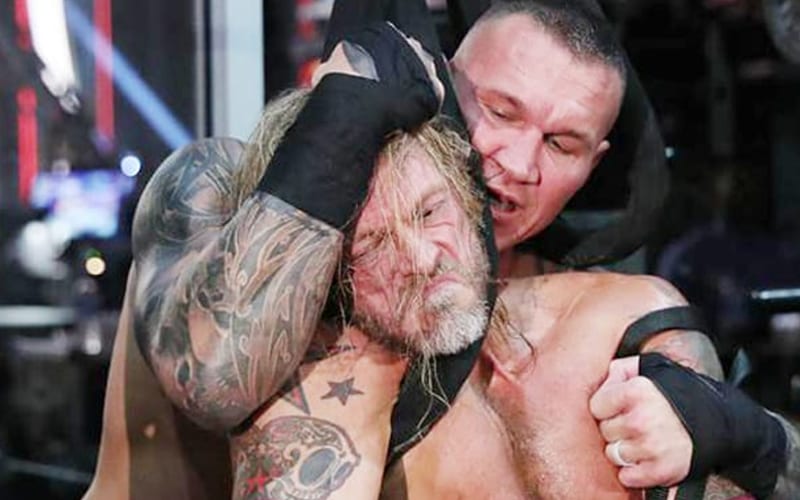 Edge and Randy Orton tore each other apart in the WWE Performance Center during their last man standing match at WrestleMania. This was a match that they had to call mostly on the fly.

During their encounter, a piece of exercise equipment was used as a strangulation device. Orton choked Edge as he said “I love you,” in his ear. Some called attention to this spot after it aired. They said it was too similar to the way Chris Benoit hanged himself after murdering his wife and child.

Fightful Select reports that they heard of zero red flags raised over this hanging spot backstage. The reason for that could be due to the fact that WWE kept everything about WrestleMania such a big secret.

We haven’t heard of any concerns raised backstage about eliminating certain parts of the Randy Orton/Edge last man standing match for concerns of comparisons to the Chris Benoit tragedy. It should be noted that significantly less people saw, knew, or were around to raise those concerns as most of the matches were tight lipped as is.

WWE kept everything under wraps for WrestleMania this year. It was widely known that any employee who leaked information would be fired.

A lot of things needed to be cut from the Edge vs Randy Orton match at WrestleMania 36. One idea even involved bringing in a drone.

Nobody saw the Edge vs Randy Orton last man standing match and drew attention to the similarities with Chris Benoit. This is why it made the final cut. It didn’t take long for others to notice after the match aired.