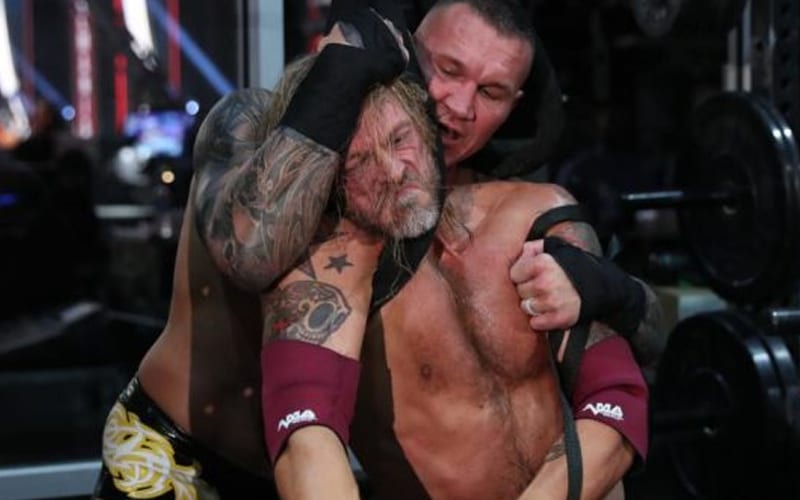 Edge and Randy Orton tore each other apart for 36 minutes during the second night of WrestleMania 36. This last man standing match included one spot that wasn’t really received all that well by some.

Edge and Orton did a spot in the gym of the WWE Performance Center where Orton wrapped weight-lifting equipment around Edge’s neck and he attempted to hang him. This was very close to what happened with Chris Benoit.

Dave Meltzer mentioned on Wrestling Observer Radio that this segment might have been overlooked by some. Others certainly paid attention to the spot and weren’t too thrilled about it.

“I know some people who go, ‘ah oh well it didn’t offend me.’ I know people in the company it offended. I know when I saw it I couldn’t not see [Benoit]. It’s impossible unless you’re brand new, I know. Here’s the other thing too. It probably affects the talent more than the fans because while you can say that some fans are new and some didn’t see it, there’s not one wrestler there who doesn’t know the Chris Benoit story, not one.”

It was also noted that the spot had to go through a chain of approval and it is very hard to believe that nobody made the call to cut the spot.

Chris Benoit was one of the best pro wrestlers on the planet. Then he took his wife and child’s life before taking his own. Benoit hanged himself on a piece of workout equipment. Perhaps Edge and Randy Orton could have rethought that particular spot in their WrestleMania match.