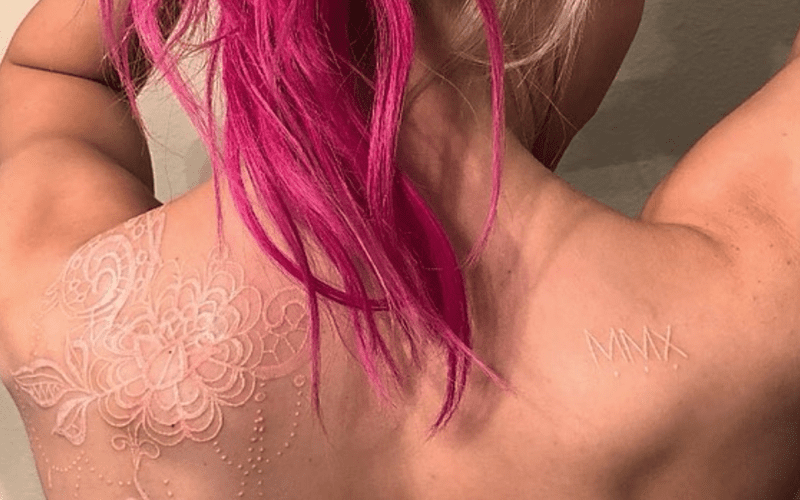 Alexa Bliss has several tattoos, but you might never see them unless you know where to look, because she prefers to use white ink. Now she has another large addition to her collection.

We’ve previously reported on several of Bliss’ tattoos. She recently asked fans on social media for some ideas of a lacy style and it looks like that’s what she went with for her latest ink.

Bliss also got some Roman numerals corrected that she had to have laser treatments to get down to a point where she could get re-inked.

Now that it’s getting to that healing phase, Wanted to share my story of my newest tattoo. All of my
Tattoos mean so much to me.
A few years back Kailyn and I got
Matching Roman numeral tattoos that mean so much to me. I love the look of white ink tattoos. I love that they heal like scars. I love that they look to be a part of my skin instead of on my skin. Unfortunately sometimes the tattoos don’t turn out the way as planned. My tattoo was done & I noticed it didn’t look like my other white inks. Either the stencil was tattooed in, or the artist tattooed with a different color ink.
After having the tattoo gone over in white 6 times, lasered multiple
Times … it healed as a green/ blue scar tissue. I thought it was going to look that way forever. Until I met
Stephanie. Stephanie is an amazing artist who took my ideas of turning this embarrassing now scar into something I’d love forever.
This tattoo is a lace design that incorporates a lot of meaningful things to me.
It includes an Eating disorder recovery symbol that blossoms into a flower for “new beginning”
When I was hospitalized, my hospital room was decorated in tinker bell items because tink was my
Favorite. So I have “ the second star from the right “ from Peter Pan hanging down. & last but not least, when I was at the worst part of my eating disorder, my doctor wanted to send me to the in patient center in Pittsburgh, because seeing 5 doctors a day wasn’t helping me. My parents made the decision to give me a break from seeing doctors all day everyday. It
Was a constant reminder of how sick I really was. So before having to be sent away, my parents took me to disney world to give me a small break. Which happened to be the best thing for me. When I went to disney, i actually began to eat. Slowly but surely. By the end of the week, I had gotten so much healthier that I didn’t need to go away to Pittsburgh. So disney is not only my
Happy place, it’s my Healing place. So there is a “ hidden Mickey” in the lace design. So all together this tattoo represents a crucial point in my life & I love the design Stephanie came
Up with to represent this moment in my life

Alexa Bliss has a couple of Disney themed tattoos. She has one that says “Stand Out” from The Goofy Movie and she also has the coordinates to Cinderella’s castle all in white ink.

You can check out her new tattoo below. It’s a great design and placed well too. Let’s just see if we can spot it on television which isn’t likely considering it was made with the intention to be a bit hidden.