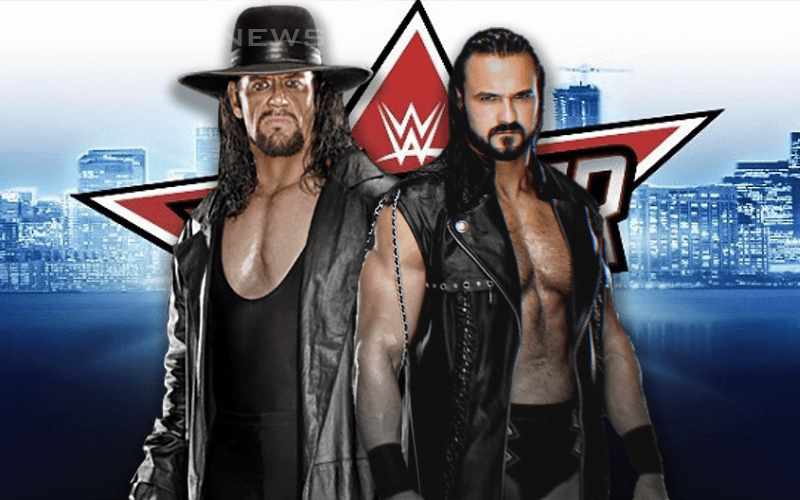 The Undertaker is coming back to work a tag team match at Extreme Rules. This is surprising because he just competed in Saudi Arabia in a match against Goldberg that most people might like to forget. However, with Summerslam right around the corner on August 11th, The Dead Man could rise again.

We previously reported that Dave Meltzer said there is an advertisement for The Undertaker vs Drew McIntyre at Summerslam floating around. We have searched high and low and have not been able to find any such advertisement.

However, we think that there is a reason why this report emerged about The Phenom’s Summerslam opponent.

Brad Shepard previously reported that The Undertaker “hand-picked” Drew McIntyre as his WrestleMania opponent. This report has since been stolen by a couple of publications (including Sports Illustrated) who did not give Shepard credit and straight-up refused to even after Ringside News founder Steve From Florida called them out on it. (Wrestling Twitter is so much fun)

WWE was considering Baron Corbin as Undertaker’s Summerslam opponent, but it also wouldn’t surprise us one bit for that match to take place at WrestleMania instead knowing the way Vince McMahon wants to push Baron Corbin due to his sex appeal. Seriously, the ladies love Baron Corbin.

It appears that Shepard’s initial report has been twisted a bit to relocate Taker vs McIntyre to Summerslam. While WWE could always switch Taker’s Summerslam and WrestleMania opponents around, we have seen no such official advertisements claiming that is the case.

We will keep you updated concerning this on-going story right here at Ringside News.