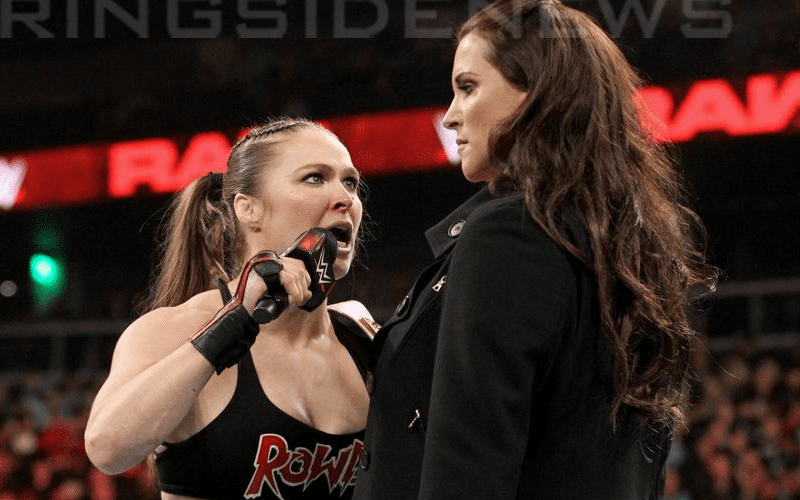 Ronda Rousey is on the road to WrestleMania, but she doesn’t appreciate the fact that Vince McMahon changed her opponent. She demanded to have Becky Lynch put back in the match to make a triple threat in the Mania main event. Then she laid down her title and walked away leaving a lot of fans to wonder what is going on.

Rousey continued to hype her feud with Becky Lynch as Charlotte Flair took a break from Twitter and had some secret training. The tweets that Rousey and Lynch posted were very non-TV-PG and WWE did not appreciate them too much either.

We have been told that any sense that Ronda Rousey is growing frustrated with WWE is legitimate. The Baddest Woman On The Planet cut a little promo on her YouTube channel about not needing a job with WWE and she has the money to leave other Superstars. That was not scripted at all.

Rousey got into WWE because it was something she wanted to do and now the travel and creative is weighing on her. Therefore, a hiatus from the company is even more plausible than ever.

WWE likes to have their Superstars take part in social media feuds that they can display on . Therefore, Rousey using terms like “fake” and saying that Becky Lynch’s armbar makes it look like she’s holding male genitalia and then just straight-up saying that she will “beat the living sh*t” out of The Man upon their next meeting didn’t set too well with the company.

It was neither confirmed or denied that WWE sent Rousey and Lynch a message to tone down their social media exchanges. It is very interesting to note that their online feud deescalated quickly after reports broke that WWE wasn’t too thrilled about the verbiage they were using on social media.