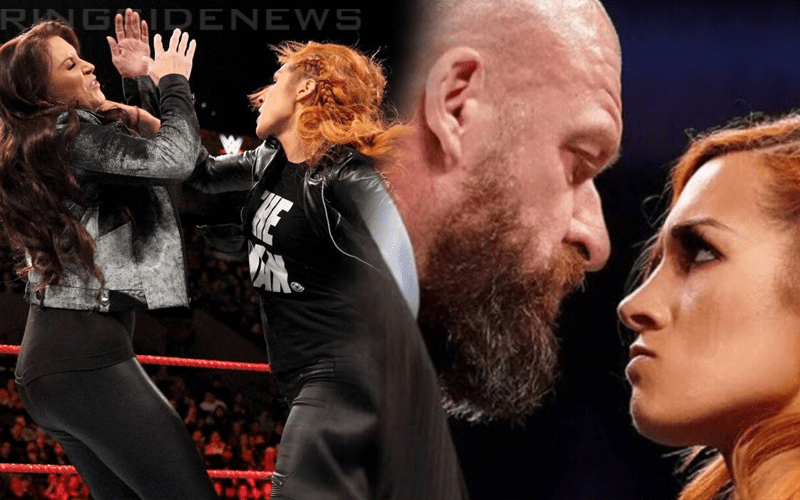 Becky Lynch was on a roll last week. She was suspended by Stephanie McMahon and then The Man assaulted the Billion Dollar Princess in a big way. They had to do a pull apart because it is WWE, but that did’t stop Lynch at all.

On SmackDown Live the next night, Lynch showed up in spite of her suspension and kayfabe injury. Triple H then came down to accuse Lynch of faking her injury and having self-destructive tendencies. This cause The Man to slap The Game as well.

Becky Lynch was invited back to Raw this week so she can possibly do it again. One thing is for sure, if Becky Lynch does assault another member of the McMahon family it will probably do very well with the fans.

The video of Becky Lynch assaulting Stephanie McMahon is currently sitting at 2,343,341 views on YouTube. That is a big number, but the clip of The Man slapping Triple H did even better with 2,981,991 hits.

WWE is keeping with the suspension angle by booking Becky Lynch accordingly at house shows.

It seems like Becky Lynch could be running through members of the McMahon Family. Since Linda McMahon is in Washington DC, it could be logical to assume that Vince or Shane McMahon could be her next target.

Only time will tell how WWE capitalizes on Becky Lynch modeling herself after “Stone Cold” Steve Austin, but it is grabbing a lot of interest.