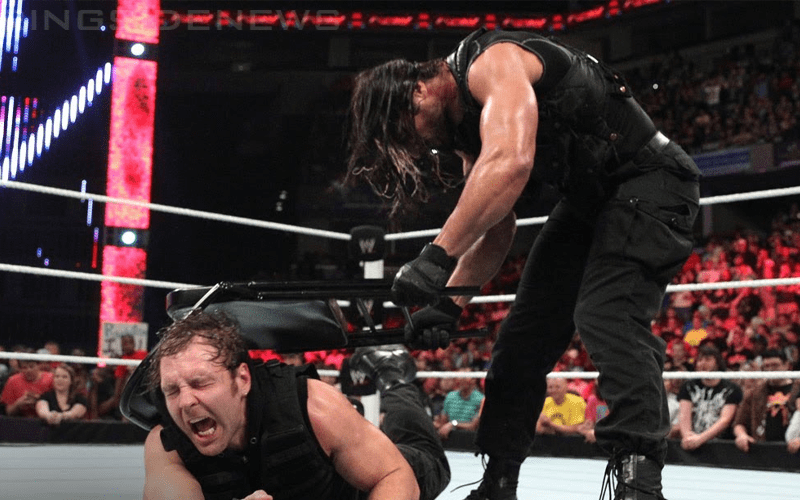 Seth Rollins broke into the WWE Universe as a member of The Shield. Alongside Roman Reigns and Dean Ambrose, The Hounds Of Justice ran roughshod over WWE. This was a great time, but all good things must come to an end.

Vince McMahon needed The Shield to separate. Then he could have three Superstars instead of one single unit. The members needed to feud and Seth Rollins fired the first shot when he turned on his brothers and went heel to join The Authority.

Rollins turning on his brothers was a landmark moment in Raw history, but Seth didn’t want to do it. He told E&C’s Pod Of Awesomeness that he fought the idea at first, but he eventually relented and grabbed a chair to smash Reigns and Ambrose in the back.

“I wasn’t ready for it, for sure. Obviously, that was not the role I expected coming out of it. When they said it was gonna be me that pulled the trigger I was almost like, ‘No, I’ve been a babyface in NXT — Ambrose is the heel. It’s not the other way around.’ It didn’t make any sense. I don’t know how to do this.”

“When we did the turn it was excellent and then it took me a little while to get in my groove. Trying to figure out, ‘Okay, who is Seth Rollins now?’ What is this character when he’s not in The Shield?

Rollins experienced a rough patch and actually considered walking out of WWE for a brief second. He stuck with Vince McMahon’s vision and rode it out. Eventually, Rollins’ run as a heel ended with a devastating knee injury. WWE dabbled with the idea of keeping Seth Rollins as a heel when he came back, but fans wouldn’t have it.

Even without the blonde streak in his hair, he was an undeniable babyface and still remains on top of the card regardless of injury. He also might walk out of WWE WrestleMania once again as a top champion after defeating Brock Lesnar for the Universal Title.

It might never have happened like this for Seth Rollins if he didn’t single handedly break up The Shield.