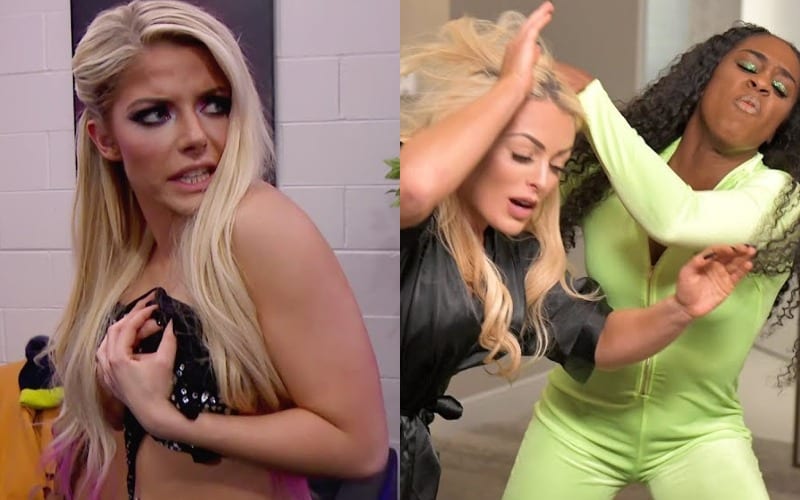 WWE tried a segment this week on Raw and SmackDown Live that was not usual in a lot of ways. Alexa Bliss was walked in on while she was changing and then the next night Noami and Mandy Rose brawled in a hotel room. The Alexa Bliss segment went viral and the hotel room brawl followed the next night with a ton of attention as well. This could be WWE’s new way to go about things, but it might be pushing the TV-PG envelope a little.

Dave Meltzer discussed these segments on Wrestling Observer Radio where he relayed WWE’s desire to program this type of content. He also said that they’re going for a demographic of viewers that they might have previously lost.

“That’s the direction they want to go. Look, it’s the direction that will help ratings, yeah it will. That kind of stuff always works like in the long run the short run. Like it won’t help at week one, but that direction will help. It will draw more teenage boys and stuff.”

WWE needs to appeal to a wider audience so putting riskier content on their programming is very likely to bring in a younger audience. They are currently losing a lot of traction with the younger generation and those are the fans needed to sustain the company for decades to come.

However, in 2019 when there are plenty of other places for teenage boys to see scantily-clad women, WWE might need to also keep their advertisers and other audience members in consideration as well.