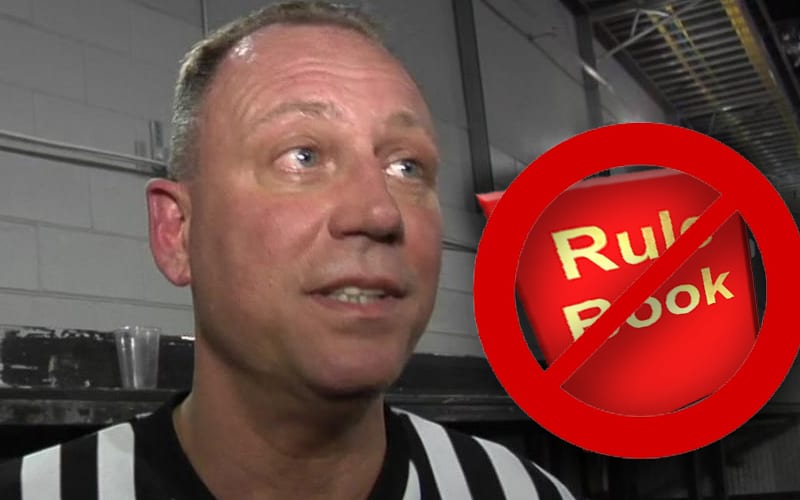 Mike Chioda was release from WWE after over 30 years with the company. His departure came on April 15th as so many others were also cut due to the pandemic. He appeared briefly for AEW, but he has remained out of the ring since.

WWE referees can get negative attention because of the way they operate in the ring. Vince McMahon can also change up his edict about how referees are supposed to officiate matches. His current idea is to call matches like a shoot. This is a way to get heels more heat when they cheat.

While speaking to Wrestling Inc, Mike Chioda explained that there is no official rulebook for referees in pro wrestling. He thought about writing one, but it was scratched because the people who were going to help him were released by the company.

“There are talent that worry about where the referee is placed and how he’s working around the referee so they don’t bury the referee, but sometimes, even from the top, from the company’s, if you have a no disqualification match, why does the guy able to get to the rope and break the count or a hardcore match or a no holds barred [match]. There’s always questions, and they’ll do things in a steel cage match where a guy will be in a hold. He gets to the ropes, and you break the count.”

“There is no rule book for refereeing in the professional wrestling business. I was actually trying to write one a while back, and it got scratched because two of the guys that were working with me in the office had gotten released. We were six months into this situation and that just went right down the tubes. This was when Johnny Lauranitis was actually still head of talent relations.”

Professional wrestling can be a very confusing subject to wrap your head around at times. The process of making sense out of what happens in the ring can be maddening if fans let it get to them. Often times, the best idea is to not worry so much about the little details and just enjoy the show, no matter how little sense it makes.