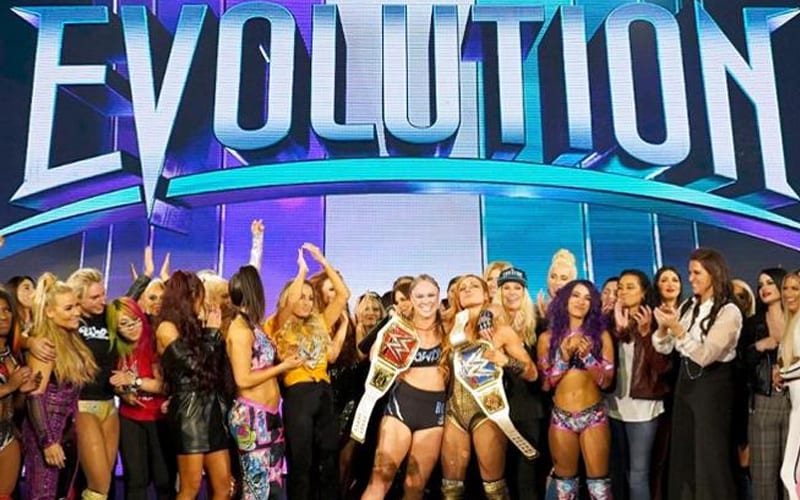 WWE held the company’s first all female pay-per-view on October 28th, 2018 in Uniondale, New Jersey. Evolution was appropriately named as it signified a huge moment in the WWE Women’s Evolution, but they have yet to produce a sequel.

Ringside News asked around about the possibility of WWE holding another Evolution pay-per-view in the near future. It does not look likely at all.

One tenured member of the creative team told us that the idea “has not been mentioned.” The company is planning for one event at a time, and Evolution is not in the cards right now.

The idea used to be thrown around every now and then prior to the pandemic. That first Evolution event was actually booked in Uniondale as a house show, but it was converted into a WWE Network pay-per-view. This luxury is no longer an option for WWE as they have a strict television schedule in the ThunderDome.

WWE Evolution was a great night of pro wrestling, and they had star power like Ronda Rousey, Becky Lynch, Lita, Nikki Bella, Charlotte Flair, and Trish Stratus, all of whom are not wrestling right now. Stratus teased a return match, and Lita is likely always game for a good reason to get the ring rust off. Fans are still waiting for Ronda Rousey’s return as well.

Sasha Banks recently mentioned her desire to hold another Evolution pay-per-view, but WWE isn’t close to the idea at all right now.