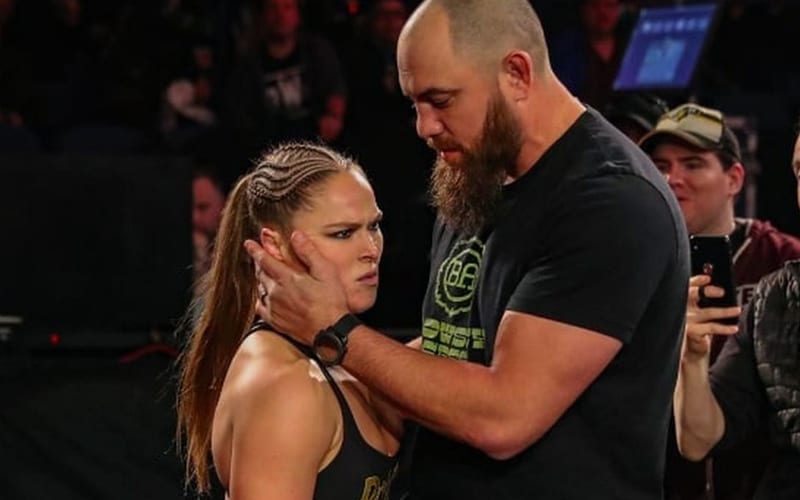 Ronda Rousey hasn’t wrestled since WrestleMania 35, but she’s been in the ring since then. The Baddest Woman On The Planet isn’t training alone because her husband Travis Browne is getting involved as well.

Browne has tons of experience in the cage as a UFC fighter, but he’s been working on way more than MMA as of late. According to Fightful Select, Browne, who hasn’t fought since July 2017, has been working on his selling and timing as well.

“Cowboy” James Storm came in to work with Rousey and Browne at an “undisclosed location.” Please click here to read what The Cowboy had to say about the awesome experience.

It’s unknown when Ronda Rousey will wrestle again, but she might have a mixed tag team partner when that time comes. She has trained “several times” in California over the past few weeks. Travis Browne has continued to impress as well.

We’ve specifically heard that Browne has been working on his timing and selling of late and has impressed people with agility for his size. As of this year, Browne was still in the USADA drug testing pool required for UFC fighters.

Travis Browne has love and respect for pro wrestling. He was the first in the ring to save Bret Hart when he was attacked during The Hart Foundation’s WWE Hall Of Fame induction. He was also featured during Rousey’s WrestleMania build.

Ringside News exclusively reported on October 14th that there were no current plans for Ronda Rousey to make an imminent return. She is certainly keeping the ring rust off.