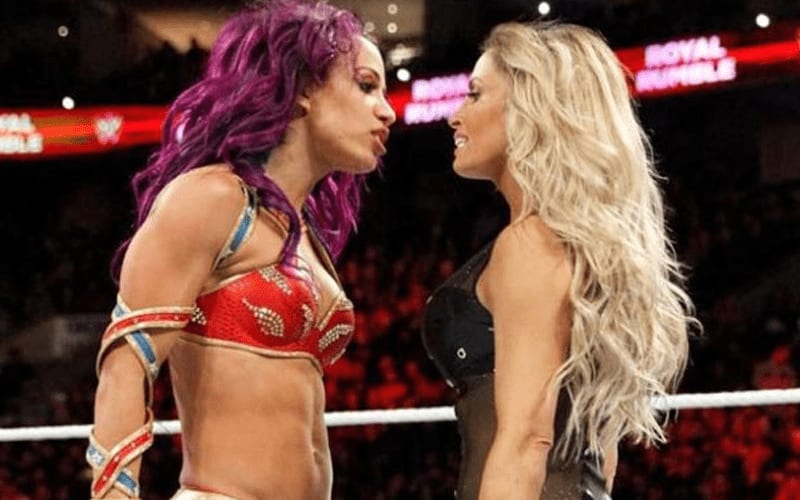 Sasha Banks and Trish Stratus haven’t been able to lock up in the ring during a singles match, but that might change eventually.

While she appeared on WWE The Bump, Trish Stratus was asked about a potential match with Sasha Banks. She said that the fans started buzzing about this after just a brief interaction in the ring during the Royal Rumble.

Trish also confirmed that she has proven that she can come back and wrestle. It seems that retirement angle isn’t a big deal anymore. Now we’ll have to see if WWE books it.

“Do you think fans want to see that? I’m not sure. I mean the fact of the matter is I can go back, it’s a proven thing now, right? I love and respect Sasha so much. I love her in-ring work. Would I love a taste of that? Yeah, I would.”

“Look, here’s the thing people are buzzing about Sasha and I and we had a what? Five-minute interaction at the Royal Rumble? That is what began the buzz, you know what I mean? That’s been like two years straight of people buzzing about it and as a wrestling fan do I think this is intriguing? Absolutely. I think it’s a pretty awesome idea, to be honest. Yeah, so that’s all I’ve got to say about that, guys.”

Now it is all in Vince McMahon’s hands. The interest is there from both participants, and the fans obviously want this as well. It might not be likely in 2020, but 2021 is supposed to be a better year for everyone, right?

If you want to see this match happen then action must be taken. Fans need to retweet this article at WWE and Vince McMahon while tagging Trish and Sasha. Starting a hashtag for the cause will probably help as well. This match isn’t impossible, but right now it doesn’t seem to be on the immediate game plan as The Boss is still dealing with her former best friend Bayley.