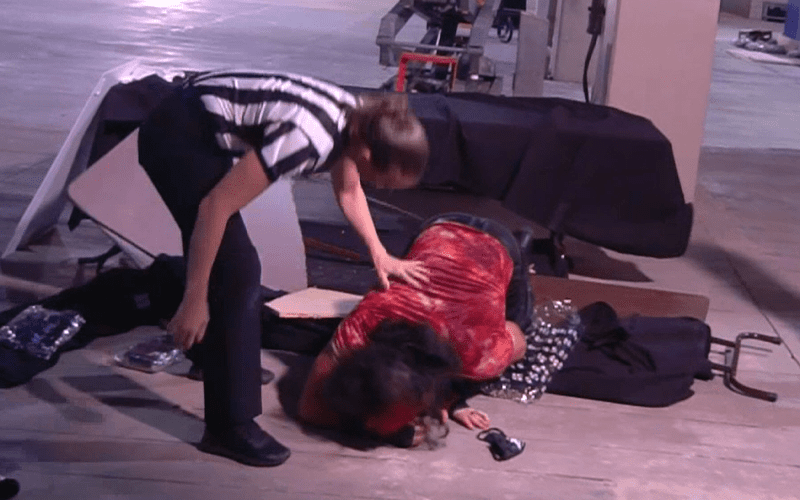 Matt Hardy and Sammy Guevara’s match at All Out ended the way it was supposed to, but they had to cut a bunch of things from the middle. Hardy was hurt early on in the match and then they had to skip right to the finish after AEW’s doctor stopped the action. Hardy took a very scary bump which you can see here.

During Wrestling Observer Radio, Dave Meltzer explained what went on behind-the-scene during that spot where they overshot the tables. Tony Khan said he wanted to stop the match. Obviously, Matt Hardy disagreed and he wanted to continue.

“Aubrey Edwards did the X sign, but that was Tony Khan in her earpiece basically saying “I wanna stop it.” So they stopped it. So, it was over and that was that. Then Dr. Samson examined Matt and Matt said ‘I want to go,’ and Dr. Samson said it’s okay to go. So they re-started it and they just did the finish. The didn’t do anything else that was planned for the match they just went to the finish which was climbing up the lighting grid and taking another stunt fall, but this time it was Sammy who took the fall into a crashpad.”

It was said that Matt Hardy was put through “concussion protocol and he passed before being allowed to continue the match.

This was a controversial decision, but they had to make a tough call in a that moment. There was a very scary period of time when it seemed that he might really been hurt.

Hardy seems to be okay now, but it doesn’t stop the debate of whether this match should have been permitted to continue in the first place.