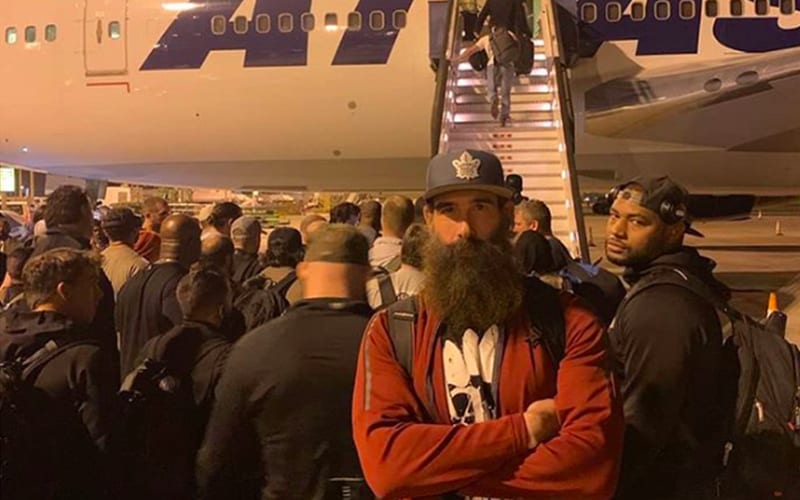 The Saudi Arabia situation surrounding 2019’s Crown Jewel event is still a matter of controversy and a class action lawsuit is still ongoing because of it. Karl Anderson and Luke Gallows were there and they’re not afraid to talk about it now.

On their Talk ‘N Shop show, Gallows and Anderson broke down their entire Saudi Arabia experience. If you remember Anderson’ wife said he wasn’t going back.

They were not shy about opening up about the travel issues they had in Saudi Arabia. They remember seeing Vince McMahon, Paul Heyman, and Brock Lesnar getting on their own planes to leave and they were left to wait with the other Superstars and crew.

They were supposed to take off at 1:00 AM Saudi Arabia time, but they stayed on the runway. Then Anderson said he heard that a pilot had to go home because he needed to rest. This is when they also heard that Vince McMahon pulled Saudi Arabia’s live feed of the Crown Jewel pay-per-view event.

More time passed and they didn’t move. Anderson asked Michael PS Hayes what was going on. He asked Hayes if they were in a “hostage situation,” but the Freebird said he didn’t know before walking off.

Everyone got off the plane and went back to the hotel. They were then told mechanical issues was to blame. Anderson still believes that they did something to the plane so it couldn’t take off. He said he felt “weird sh*t” going on when it came to politics.

There was a lot of tension, which we could feel from all the way around the world. Thankfully, everyone was able to make it back home safely. It was certainly a nerve wracking situation for a bit.