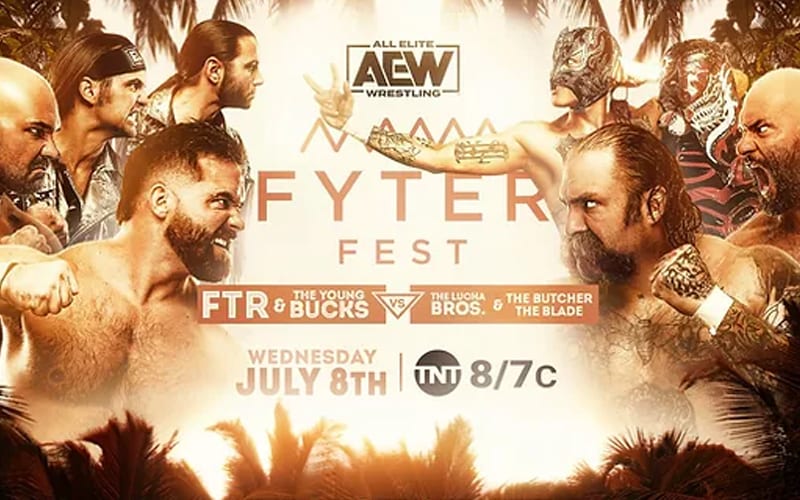 Update: It is now reported that Cody will have a TNT Title open challenge.

Original: AEW Fyter Fest was a special event through FITE TV last year. This year it is a two-week special on TNT. Night one of Fyter Fest was last week, and now fans will get to see what they taped on the following day.

Much like NXT, AEW was not immune to spoilers. Click here if you want to check those out. Joey Janela dragged those spoilers by saying that AEW actually filmed 17 1/2 endings.

The AEW World Title will not be on the line at Fyter Fest. Jon Moxley decided to wait before returning to work out of fear of COVID-19. His wife Renee Young has it, and he doesn’t want to take any chances. Moxley vs Brian Cage will take place at Fight For The Fallen on July 15th, but Taz has a huge announcement planned for Fyter Fest.

Kenny Omega and Hangman Page will defend the AEW World Tag Team Titles against Private Party. That will be the only title match on the show tonight.

Nyla Rose will return to action, but her opponent was not confirmed. SCU will also battle the Dark Order this week at Fyter Fest.

Lance Archer will wrestle Joey Janela in a match that Jim Cornette won’t want to miss. The Young Bucks and FTR will also team up to face The Lucha Bros and The Butcher & The Blade.

One match that fans might tune in to watch is Chris Jericho vs Orange Cassidy. Their feud received a ton of attention in recent weeks. You can check out the complete card below.

Nyla Rose in action next week