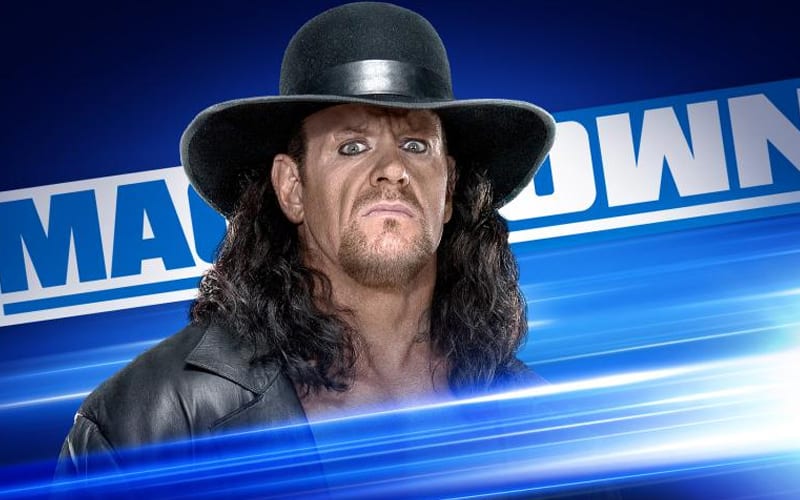 We have also heard a report that Jeff Hardy and Matt Riddle will be on the show this week. We’re not certain of much right now. WWE Friday Night SmackDown might be a can’t miss episode just because of all the mass chaos going on backstage.

The show starts at 8:00 PM EST so check back then!

They started out with an Undertaker music video featuring a ton of highlight footage.

WWE Superstars were on the ramp and socially distanced. They were clapping and chanting “Thank You Taker.”

Tonight they will celebrate The Undertaker’s legacy. They started out by showing his Survivor Series 1990 debut.

The Undertaker Vs. AJ Styles

For our full WrestleMania 36 results by Curtis Dillon, click here.

Styles calls for The Undertaker and says he’s ready. We hear a motorbike and the Badass arrives to Metallica!

Styles and Undertaker come face-to-face and Styles says he took the liberty of digging a grave but Undertaker says he dug it for himself. Styles talks some more trash, then grabs a rock and tries to hit Undertaker but the Deadman fires a right hand. Undertaker punches Styles around the graveyard, then drags him toward the grave but AJ breaks away and runs to the hearse.

Undertaker throws Styles into the side of the coffin, then slams him into it a few times. Undertaker lifts something and tries to smash AJ with it but his arm goes through the hearse window and he pulls it out covered in blood. Undertaker continues the assault and tosses Styles onto the windshield, smashing it. Styles climbs on top of the hearse and ‘Taker follows him.

They exchange shots on top of the hearse with the Deadman unloading some ground and pound. Styles rolls off the hearse onto the ground and tries crawling away. AJ throws grass in ‘Taker’s face, then punches him and hits a low blow. Styles drags Undertaker over to the grave and punches him, trying to knock him in, but the Deadman fires a right hand back.

Undertaker punches AJ and he rolls into the grave. Gallows and Anderson appear and cowboy music plays. They taunt Undertaker and he walks towards them but suddenly a nearby bar comes to life with white light and out come eight or so druids. They surround Undertaker and he starts fighting them off. Gallows and Anderson join the attack and beat Undertaker down. Anderson grabs a shovel but the Deadman starts fighting back, grabs the shovel himself and cracks them both with it.

AJ returns and smashes a headstone or something over Undertaker’s back. AJ punches the life out of ‘Taker before rolling off and yelling “you broke my finger!” AJ tells him to get up so he can bury him and end his career. Undertaker stands up by a wooden wall and Styles tackles him through it! Styles gets to his feet and says “you just don’t have it anymore, old man.” Undertaker sits by a post and gives AJ the finger.

Styles punches him again and ‘Taker crawls away. AJ continues to talk trash as he lifts a shovel and says he’s doing the world a favor. Undertaker stands by the grave and AJ smashes the shovel over his back and he falls inside. AJ lifts a handful of dirt and says “ashes to ashes, dust to dust”. AJ climbs onto the nearby digger and tries to bury ‘Taker but a light comes from behind him and The Undertaker is there!

‘Taker punches AJ off the digger, then back up towards the barn. AJ climbs a ladder onto the roof of the barn to escape. Undertaker says “it’s the unholy trinity, remember? This is what you wanted?” Undertaker climbs onto the roof and raises his hands, causing flames to erupt behind AJ. Gallows and Anderson come back and Undertaker starts punching all three before tossing Gallows off the roof and hitting Anderson with a Tombstone.

AJ asks ‘Taker how he’s doing this, then punches him but the Deadman grabs him and Chokeslams him off the roof through a wooden platform! Undertaker climbs down and stands over AJ, asking him to say his wife’s name, and asking how old he is. Undertaker says they’re just getting started and drags AJ off the platform. He carries him over to the grave and says he’s tougher than he gave him credit for. He grabs Styles by the throat and AJ begs for mercy. Undertaker let’s him go, then boots him into the grave. The Undertaker buries AJ and wins!

The Undertaker walks off and lifts his bandana. He puts the bandana on, then gets on the motorbike. He drives forward then stops with the barn in the background. He raises his arm and fire erupts around the barn and his logo appears on the front. The Undertaker drives off into the night.

And that’s it for WWE WrestleMania Part 1. I enjoyed the heck out of that show and that last match was a blast. Let us know what you thought and come back tomorrow for Part 2. Until then, good health!

Back To The Ring

King Corbin was in the ring following the Boneyard Match. He was trash talking The Undertaker. He doesn’t like that people chanted Thank You Taker. He doesn’t thank taker.

“Thank You Taker” chants broke out and the people in the crowd were wearing masks. Holy crap.

Corbin said he’s leaving Taker with two words: “You suck.” Then Jeff Hardy jumped Corbin and ran him off quickly.

Jeff Hardy cut an interview backstage about the Undertaker. He said Mr Rushmore should have Taker’s face on it 4 times. He’s unleashing his painful knowledge he acquired from Deadman University tonight on King Corbin.

Bayley and Banks sat in on commentary. Bliss and Cross acted like they were going to get along at first. Then Nikki turned on Bliss and they brawled before Bliss took a bump into the barricade.

They continued in the ring as Cross took a double team attack. Then Lacey Evans set Cross and Brooke up for a double bronco buster which she hit.

Evans went for a flipping move, but Brooke knocked her down hard. Dana climbed to the top rope and hit s dive, but Cross broke up the pinfall.

Bliss returned and took Brooke down with some shots. Then Bliss went up top, but Dana got her knees up on a Twisted Bliss. Cross dropkicked Dana out of the ring. Then Bliss and Cross squared off against Evans who fought them both off.

Brooke too a Women’s Right and then Nikki Cross rolled her up for the win.

These Superstars started off fast, and the heels soon lost control to the babyfaces. The Lucha House Party took control over Cesaro until Nakamura tagged in.

Nakamura hit his Good Vibrations move. Then Morrison took the tag as Kofi came in. The two got to wrestle a bit and Johnny kicked Kofi off the apron and sent him to the floor. Then Miz sent Kofi into the boards.

Nakamura landed a stiff kick when Kofi returned to the ring. Then the heels taunted the babyfaces together.

This match continued after the commercial as Miz and Morrison dominated Kofi. Miz continued to keep Kofi down with a submission hold. Kingston tried to fight it of, but MIz fought harder.

Kingston hit a tornado DDT and then crawled the his corner. Shinsuke got the tag first and didn’t let Kofi get to Big E. Then Nakamura hit a baseball slide on Big E. Kofi slammed Kofi down and geared up for a Kinshasa, but Kofi hit a double chest stomp to stop him in his tracks.

Metalik took the tag and so did Morrison. Metalik sent Johnny across the ring with a rana and then Morrison landed a kick after Metalik was distracted. Metalik hit a sunset bomb for a two count. Then he hit a moonsault and tagged Lince Dorado who hit a shooting star press, but the pin was broken up.

Miz took a tag. Metalik took a tag but was taken off the apron. Dorado hit a springboard stunner and hit Morrison on the outside. Metalik jumped on the top rope and scaled the top rope to hit a splash for the win.

Strowman talked about his history with Bray Wyatt. He said that they were sitting on the edge of Bray’s swamp and a snake started slithering toward the lantern. Braun wanted to smash it, but Bray said “that’s my friend.” Then Bray walked over to it and the snake bit him in the face. Bray just laughed as the snake kept biting him. “That is when I knew I was in the presence of evil.”

Braun said he started doing the devil’s work with Wyatt and he loved every second of it.

Then Braun suggested that they take their match to the swamp. He said “let’s go home.”

Corbin started it out by flooring Hardy with a clubbing blow. Corbin picked Hardy apart with punches and worked slow to taunt the crowd.

The Corbin stood on Hardy’s head for a bit before continuing the assault with punches.

Hardy dodged a punch and clotheslined Corbin over the top rope. They battled on the outside before Hardy sent Corbin over the announce desk. He followed that up with a double ax handle off the apron before they returned to the ring.

Corbin rolled out of the way and Hardy missed a Whisper In The Wind before Corbin sent Hardy crashing outside. Then Corbin mocked The Undertaker a bit.

WWE Superstars surrounded the ring and pounded on the apron to cheer Hardy on.

This just motivated Corbin to beat Hardy down even more. Corbin did his run around the ring post spot and smashed Hardy with a clothesline.

Corbin smashed Hardy against the hockey boards again and got another two count in the ring. Hardy hit two jawbreakers and fought back. This was a bad edit. Something went wrong there.

Corbin ate an inverted atomic drop ad a basement dropkick. They continued and Corbin his a Deep 6 for a two count.

They continued and then Corbin started taking a beating from everyone. Corbin brought it on himself. Big E took him down and then Strowman ate a powerslam.

Then they invited Matt Riddle into the ring. Riddle strutted around and hit a Floating Bro on Corbin. The babyfaces celebrated as Jeff Hardy stood tall.

They ended it by giving a nod to the Undertaker.