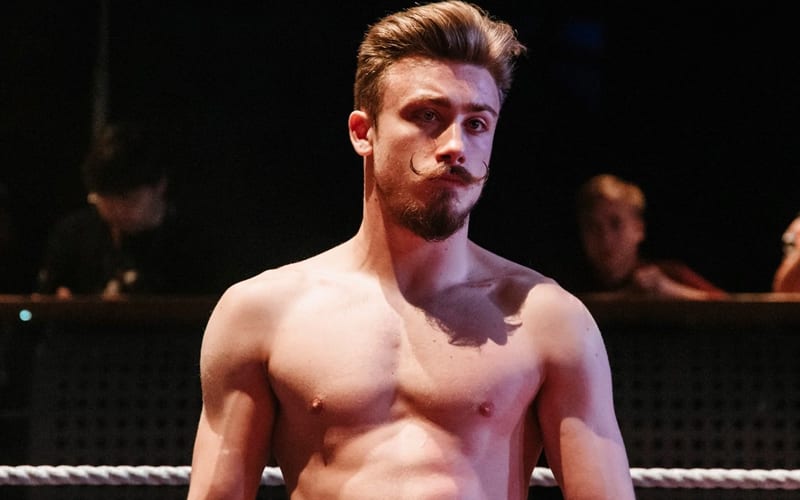 Scotty Davis was called out by his ex girlfriend as part of the #SpeakingOut movement. He has now replied to her accusations with his own version of the story.

Davis was indefinitely suspended from Progress following claims of abuse. He was also stripped of the company’s tag team titles. Travis Banks and Jordan Devlin were also suspended. Devlin saw his half of the tag team titles stripped as well. The company also announced a permanent separation from David Starr and Marc “Paz” Parry.

Scotty Davis answered to his ex girlfriend’s accusations of abuse, manipulation, and rape. He stated that he wished to keep his personal life secret, but he addressed his story to fans. This relationship took place when he was 15 and he admitted that he was too young to be in that situation.

It was alleged that he spoke with his ex recently and everything seemed to be okay. He then admitted that “obviously I was wrong.” He called her accusations fabricated and stated that there was no mention of those horrible things as they recollected their relationship recently. You can read his entire statement below:

Over the past few days, many brave people have spoken out about traumatic experiences they’ve encountered due to wrestling. I absolutely support these people and I’m glad to see the truth out in the open about many of these horrific acts. Unfortunately, allegations were made against me, allegations that would paint me as manipulative, an abuser and a rapist. These things couldn’t be any further from the truth and the very thought of it sickens me greatly. That was a manipulation of the movement. I strongly deny all allegations towards me by Amy Behan. They are fabrications of the truth and nothing more.

She stated after her allegations that she hoped I get help for my anger. I feel as a 17-year-old who found out the woman he loved cheated on him with one of his best friends that I had reason to be frustrated. I was manipulated heavily during his time yet still tried to mend things shortly after. It didn’t work and it made things worse. There was a lot of pettiness both ways for a long time that affected us and those around us. I’ve learned from the situation, and have grown and matured.

We discussed our past in detail about a year ago, these fabricated stories did not come up in our conversation. Since then, we’ve been friendly at training, shows and even outside of wrestling. Although we had a messy past, although we hurt each other and I feel in hindsight our relationship suffered from a lack of communication from both parties. We still agreed to put it behind us for our sake and for the sake of our friends and peers. I was led to believe she was willing to do the same. Clearly, I was wrong.

I apologize to fans, friends and anyone who supported either of us, that things have gotten to his point. I will do everything in my power to make things right. This whole situation should have been handled better a long time ago. It hurts that Amy has been holding on to so much anger and sadness for all this time. It hurts more than she would resort to lies in an attempt to be rid of me.

These allegations are taken very seriously. I’m disgusted that she would take advantage of other people’s tragedies and use this movement to spread lies with malicious intent. I’m well aware I will be condemned for sharing my side of the story but I refuse to be placed on the same level as pedophiles, domestic abusers and rapists. I am not nor will ever be that person or anything close to that. I hoped for a long time that me and Amy could settle our problems among ourselves, clearly, it’s gotten past that and greater measures will be taken.

I am an outspoken person yet I prefer to keep my personal life private. That wasn’t possible in this case. Having sought legal advice, I have been advised not to say too much. So from here on I’ll be saying no more on the subject on a public platform.

Scott Davis is still suspended from Progress Wrestling, and he is no longer a tag team champion. He was advised “not to say much” after seeking legal advise. That seems to be a common answer as Joey Ryan had the same sort of response as part of his reaction to allegations against him.

The reactions to Scotty Davis’ reaction have been mixed. Some opinions were not swayed in the slightest by what he said in response, but others have implied that it is a case of “he said, she said.”

The #SpeakingOut movement is trying to create a safe space in pro wrestling for stars and fans alike. We will keep a close eye on this on-going situation right here at Ringside News.