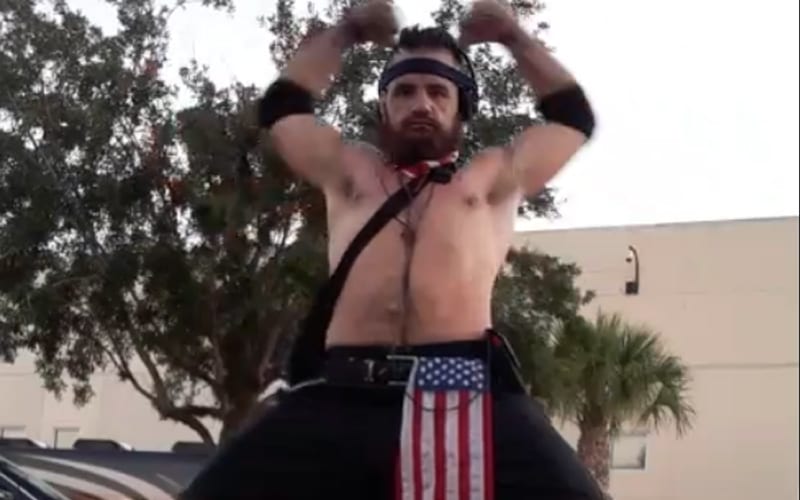 Armando Alejandro Montalvo is also known as the WWE Performance Center Stalker. He earned that moniker the hard way by getting shot by Orange County Police outside of the WWE Performance Center in 2015. He was there at the time to smear feces mixed with milk on the building. They thought he had a weapon so he was shot. The story between Montalvo and WWE continues to this day.

Weeks ago, he was spotted outside of a WWE television taping. He was carrying a cross and ranting loudly. WWE filed a violation of a protective order claim on him. This saw Montalvo in court where he called the judge “baby girl.”

WWE taped Raw at the Performance Center tonight which is a walk from Montalvo’s house. He showed up and started another Facebook live stream.

Several police officers and security were present, but Armando had a good time chatting with them and putting on a show. He reenacted his WWE Performance Center shooting by laying on the pavement as well.

“God bless you, what’s your name?” and “Hey! Don’t smoke cigarettes, if you do, you’ll cough and then you’ll drop dead!” were the kind of things he yelled at people. The entire time, he kept the camera pointed toward himself, but then we heard a familiar voice.

Lacey Evans was heard on the video. He never turned the camera around, but it was definitely her. Then Dana Brooke joined the conversation. Both of them came out in an attempt to resolve things.

They both encouraged Armando to come in and be a part of Raw. As we previously reported, they did allow some fans in the building this week. It’s unclear if Evans and Brooke were aware of Armando’s history with WWE.

The police made it clear to Montalvo that if he steps foot on WWE property then he will go to jail. This prompted Montalvo to yell that “THE DIVAS ARE TRYING TO GET ME INTO TROUBLE!”

Lacey Evans and Dana Brooke eventually gave up. They had things to do so they went back inside.

Armando was then confronted by a man who was upset with him. All of the yelling upset this man’s young daughter. Things got heated and Armando told the man to take the first swing. This is when the upset man informed Armando that he’s not afraid to go to jail.

The two never fought because a WWE referee came out to break them up. The camera didn’t get a clear view of the ref’s face, but Montalvo did turn the camera around, and for a brief moment we could see someone in a striped referee shirt. Someone else told him to “try AEW.”