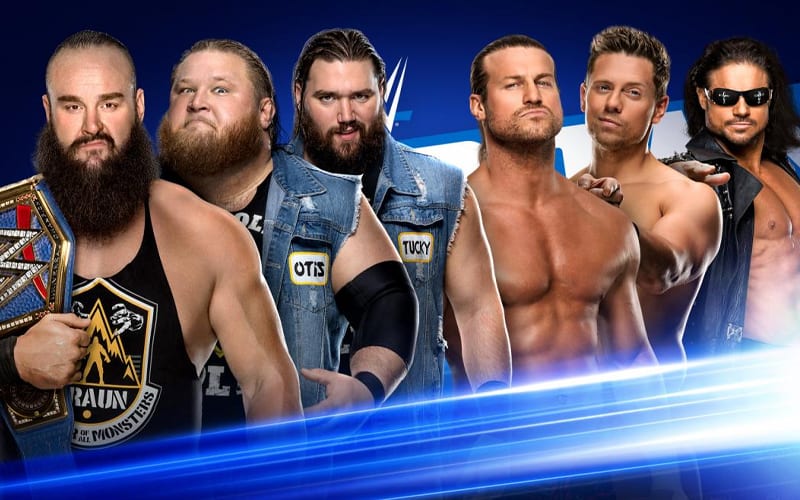 There are three segments announced for the Backlash go-home episode of Friday Night SmackDown. One of them is probably going to be controversial.

Jeff Hardy and Sheamus are set to have a contract signing this week. Ringside News exclusively reported that Vince McMahon came out to personally produce this segment. You can click here for the spoilers of that segment.

Heavy Machinery will reunite as they team up with Braun Strowman to face Dolph Ziggler, The Miz, and John Morrison.

The big match of the night is Daniel Bryan vs AJ Styles for the Intercontinental Title. Odds are Sami Zayn won’t be happy about watching this one from home.

Renee Young was in the ring. They’re starting with the controversial contract signing.

Sheamus walked out and he had a guy in a lab coat with him. There were also some security guards and two of them were carrying down a partition. The gimmick is that Sheamus is going to demand a drug test. Hardy is supposed to stand inside that waist-high puppet stage and pee in a cup.

Everyone booed the piss test which is jus tall kinds of iconic. They booed Sheamus’ request for a drug test. Then Jeff Hardy finally said “My name is Jeff Hardy and I’m an alcoholic.” If he has to pee in a cup, then fine. Sheamus obviously doesn’t realize how ineffective urine tests are at picking up alcohol.

Sheamus said that he has a rapid test for immediate results. He even paid for it himself. Then Sheamus told Renee Young to leave because Jeff was having “stage freight.” Then Sheamus gave us a message to not do drugs like Jeff Hardy.

Then when Sheamus went over to Jeff Hardy, he had filled up the entire container which was far too much human urine for one session, especially during such a short PSA from Sheamus.

Sheamus suggested that Hardy say “just say no.” Then Hardy said “it’s better to be pissed off than pissed on” before slinging the pee in Sheamus’ face.

They bleeped the second usage of piss because they were talking about the act of it instead of using it as a figure of speech. English is an interesting language.

Sheamus wasn’t happy at all. He tore up their little puppet stage and took off his pee soaked shirt.

After commercial, Sheamus was shown backstage gargling and trying to wash up. The doctor said that Hardy’s results came back negative. Sheamus couldn’t believe it. He was very upset that he was showered in pee for nothing. Don’t you hate it when that happens?

Cesaro and Kofi Kingston started things out. Kofi hit a splash for a one count before Cesaro caught Kofi off the ropes and turned it into a tilt-a-whirl backbreaker. Nakamura got the tag and he quickly caught a double stomp to the chest from Kofi.

Kingston sent Shinsuke out of the ring and Big E got the tag. Then Big E launched Kofi over the top rope and onto Nakamura.

Nakamura nailed Big E with a kick to the back of the head and he fell off the apron. Then Cesaro hit an uppercut and E fell hard. Cut to commercial.

The heels continued beating down E as they tagged in and out. Then Big E hit an elbow on Cesaro and a belly to belly throw. Kofi and Shinsuke took the tags and Kofi had the momentum.

Kingston hit a rally of signature moves including a boom drop. He started gearing up the crowd and then he hit an SOS on Nakamura, but Cesaro broke up the pin. Big E clotheslined Cesaro over the top rope.

Kofi climbed up top and Nakamura joined him. Kofi kicked Shinsuke down and then Kofi went for a crossbody, but Nakamura got his knee up and got the pinfall win.

Otis and Tucker were having a segment backstage and then Mandy came in and gave him a kiss and his briefcase. Then Hardy and Sheamus continued fighting backstage. They did a pull-apart backstage as we cut to commercial.

They played a nice video package before this match started.

This match got started with a lockup and then they were off to test each other early on. Bryan came out of an arm submission with a dropkick that sent AJ tot he corner.

Before they locked up again, Styles kicked Bryan and continued to work like a heel. Bryan blocked Styles’ suplex attempt. Then Bryan sent AJ out of the ring and hit a dive on him.

Bryan remained in control as he tried to tie Styles up like a pretzel. Styles got up and nailed a dropkick off the ropes to slow down the pace a bit.

Styles nailed some right hands and chopped Bryan in the corner. Then Bryan came back with some forearm shots. Bryan took Styles down and then Styles got out and tried to hyper-extend his elbow.

AJ Styles sent Bryan down to the mat and got back up with him. Then Bryan returned fire with a knee to the midsection. Bryan got on a surfboard submission next, but he changed his mind and locked on another string of holds.

Bryan focused on AJ Styles’ leg as he continued. Then he stood AJ up to kick him in the corner. They traded roll-up pins and then they continued trading near falls until they stood to their feet.

When we got back from commercial they were still evenly matched. Bryan tried to get a Yes Lock, but AJ launched Bryan over the top rope instead.

AJ jumped down, Bryan grabbed him, and sent him into the ring post. Then Bryan stomped on AJ’s elbow on the ring apron.

They returned to the ring as Bryan continued to work on Styles’ left arm. Then AJ created separation for moment before Bryan zeroed in on Styles’ elbow once again.

Styles rolled to the apron, but eventually came back in. Then Bryan missed a dropkick to the corner and he went crashing against the buckle.

AJ Styles took control at that point. He grabbed Bryan’s knee and slammed it against the apron. Then he returned to the ring where he continued to pick Bryan’s knee apart.

Bryan nailed a kick to the head and then it was a race to their feet. AJ tried for a springboard move from the apron, but Bryan shoved him back and then he nailed some strikes in the corner before placing him up top. He hit a Frankensteiner and got hyped up.

Bryan started nailing Yes Kicks, but he missed the fourth. AJ returned fire with a stiff clothesline. Cut to commercial.

We came back and those two were still going at it with strikes. Then Styles was lifted over the top rope and he landed hard. Bryan went for a dive, but Styles landed a kick.

Then Styles went for a Phenomenal Forearm, but Bryan locked him in an armbar. Then Styles reversed it into a Calf Crusher.

Bryan eventually got it into an armbar again, but Styles got out of it before Daniel kicked his head in for a two count.

Bryan placed AJ on top, but Styles fought off. Then Daniel Bryan jumped back up, but he was knocked off again. Bryan jumped up a third time and hammered down at Styles with forearms. Then Bryan hit a Superplex before they cut to commercial again!

They continued evenly matched. Bryan flipped over Styles and sold his leg before AJ hit a neckbreaker for a two count. AJ tried to pick up Bryan, but he was met with elbow. Then AJ nailed a Pele Kick and a brainbuster for a two count.

Bryan tried to get on a Yes Lock and finally locked it in. Styles got out of the hold and Bryan started to pump himself up. The Yes Chants started in the crowd. Then Bryan got AJ and started stomping down on him.

Then Bryan prepared for the running knee, but AJ caught him and hit Styles Clash, but he couldn’t pin him.

Then Styles nailed a Phenomenal Forearm for the win.

Braun Strowman cut a promo backstage. It was okay. He’s the Universal Champion and plans to remain so following Backlash.

The ring was done up like a celebration with balloons as the WWE Women’s Tag Team Champions came to the ring.

Bayley yelled at the NXT crowd and they started a “you suck” chant. Bayley said it’s lonely at the top. She said once you’re the most dominate SmackDown Women’s Champion in history it can be lonely, but she’s not lonely, because she’s got Banks.

Banks said that they’re unstoppable together. Then Bayley was about to read a poem she wrote before Alexa Bliss and Nikki Cross came out. Nikki said they love a good party after Bliss dragged Bayley for reading poetry.

The IIconics showed up on the screen with the RAW background behind them. Bliss and Cross attacked Bayley and Banks and sent them out of the ring.

The Miz & Morrison debuted a new music video against Braun Strowman, but the video was cut off by Strowman’s entrance.

They played a Matt Riddle promo. He’ll be on the show next week.

This six-man tag team match continued until Corbin was shown backstage hitting on Mandy Rose. Then Otis appeared backstage and jumped him as they did a pull-apart.

They continued in the ring without Otis. Tucker took abuse from Dolph Ziggler as Strowman tried to cheer his temporary tag team partner on.

Tucker finally got to his feet, but Ziggler drove him back into his corner where Johnny Drip Drip took the tag to apply some strikes and get a near fall.

Tucky sent Johnny outside and then got rid of Miz. Ziggler grabbed him until he caught a kick to the head. Then Miz and Morrison pulled Braun down just as Tucky was about to tag him.

Otis and Mandy came back just as Tucker nailed a kick. Otis took a tag and knocked down Miz and Morrison. He hit a shoulder tackle on Ziggler, body slammed Miz and pancaked Morrison. Ziggler was the legal man and he hit Otis with some shots that he didn’t sell.

Otis threw Ziggler out of the ring. Then Braun did hit Freight Train spot around the ring on the heels. Otis did a Caterpillar on Ziggler and got the win.