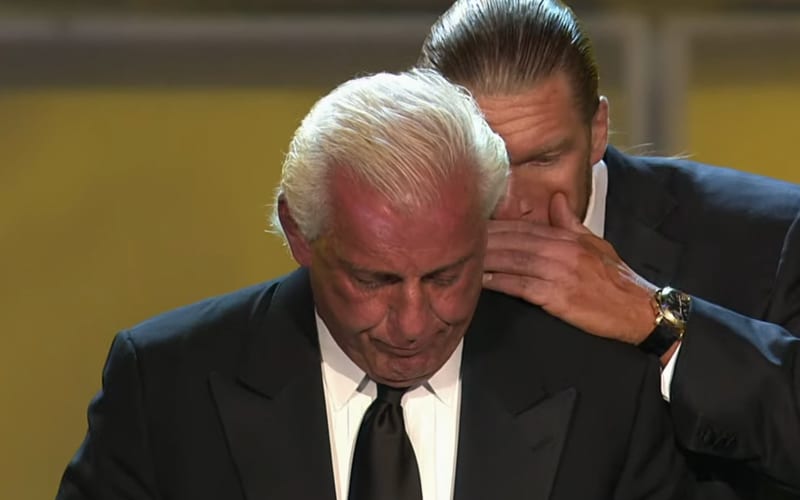 Triple He’s career includes a long list of great moments, but not all of them can be pleasant experiences. During Ric Flair’s WWE Hall OF Fame speech, he went on a bit too long and Vince McMahon put The Game in an awkward situation.

During WWE 24’s episode on Ric Flair, Triple H remembered that The Nature Boy was taking his time during his WWE Hall Of Fame speech. Then Vince McMahon told his son-in-law to have The Man wrap things up.

“Now, Ric’s doing his speech, and at some point, I see somebody wave from the curtain, like wave me over. I stick my head into the gorilla position. Vince is like, ‘how much longer has he got? He’s talking about the 70s, he’s not even in the 80s yet.’ Vince is like, ‘Well, we’re going to get dropped dead off TV, you’ve got to go out there and cut him off.’ ‘You mean you want me to go on stage and tell Ric Flair to wrap up his induction speech?’”

“Now, there is panic at Gorilla, like people calling me over. ‘Why didn’t you tell him, well, I did tell him.’ Why isn’t he wrapping it up,’ I said ‘it’s his Hall of Fame speech, and they were like go tell him again.’”

The event was saved thanks to Triple H stepping in and doing as Vince McMahon requested. Ric Flair was eventually reigned in and the program wasn’t cut off early from television.

Triple H handled himself very well under that kind of unexpected pressure. You can check out the classic clip below.