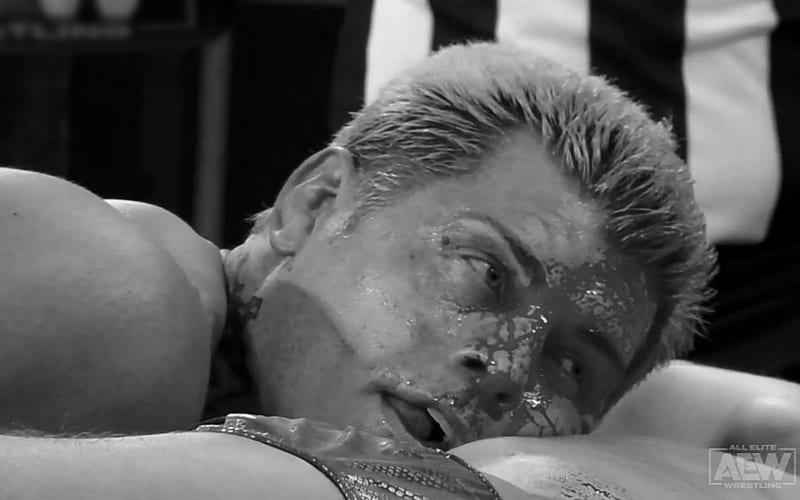 AEW set out to create a new kind of pro wrestling, but their stars don’t follow the rules like some would prefer. The company also isn’t afraid of spilling blood on television.

FTR’s Dax Harwood recently took a shot at the AEW tag team division for not following the rules. He told Pentagon Jr to stay home until they learn what a tag rope is for.

Former WWE referee Jimmy Korderas also had a lot to say about AEW ignoring the rules on a recent Reffin’ Rant. His message continued from there.

“I can go on and on about the refereeing and the lack of logic and the way they distract the referees being creative and just brutal — just burying the referees.”

Then Korderas changed direction and addressed Cody Rhodes bleeding on AEW Dynamite last night. AEW is testing their stars and staff for COVID-19 which is something WWE has yet to do. It was still in bad taste to feature blood on the show, especially if it was intentional.

“I’m gonna talk about Cody Rhodes hard-waying himself and getting blood and getting sympathy on himself in his match against Jungle Boy. Yes, I understand the goal was to get Jungle Boy to the next level even though he wasn’t going to win the match. That was possible to do without the use of blood.”

“We have to think about the times we are in right now. Yes, we want to evolve pro wrestling. Yes, we want it to get better and be creative and think outside the box, but the one thing we shouldn’t be thinking about is the use of blood. Yes, it ain’t ballet — accidents happen, but this was no accident. This was intentional. We’re living in pandemic times. Blood is a no-no plain and simple.”

Jimmy Korderas didn’t say whether he liked the Cody Rhodes vs Jungle Boy match on AEW Dynamite this week. Click here for that complete coverage. His point is a valid one as so many people are dealing with situations where seeing blood might not be so entertaining for them.