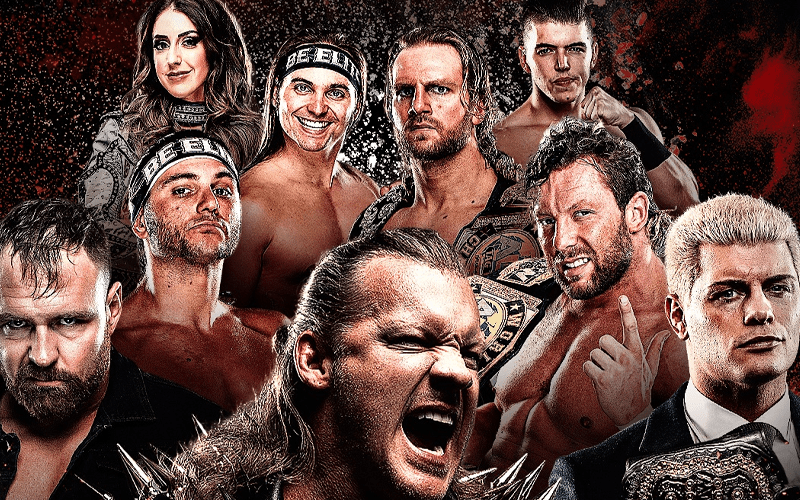 Tonight’s episode of AEW Dynamite will feature the headline bout of Cody Vs. Jungle Boy for the TNT Championship. Last week JB won a Battle Royal to earn this opportunity, but it came at MJF’s expense, so don’t be surprised if he gets involved.

Elsewhere tonight, The Revolt will have a sit-down with Tony Schiavone, Brian Cage, Nyla Rose, and Chris Jericho will all be in action, and the AEW Tag Team Championships will be on the line.

And that’s our preview of tonight’s AEW Dynamite. Follow along on the Ringside News app and enjoy the show!

This week’s AEW opens with a recap of last week, and the announcers running down tonight’s card.

A role model like Dr. @RealBrittBaker, D.M.D. knows how to roll in style. #AEWDynamite #AEWonTNT pic.twitter.com/dwU6rfZMQO

We start this Championship bout with Omega and Havoc. They trade blows and Ford pulls Kenny’s leg to distract him, allowing Havoc to take control. Havoc drops Kenny and tags Sabian, who takes a headlock. Havoc tags back in but Omega drops Kip on the apron, suplexes Jimmy, and tags Page.

We see FTR watching from the crowd as Hangman drops Havoc with a flurry. Omega tags back in and hits a double axe handle, then immedaitely tags Page and they chops Jimmy together. Sabian jumps at both but gets caught and thrown recklessly.

Penelope jumps at Hangman for a hurricanrana but he stays on his feet and tells the referee not to end the match. Hangman drops Ford and the referee sends her to the back. Sabian and Ford distract the referee, allowing Havoc to attack the Chamos with a wrench. Page kicks out, then drops Sabian on the apron.

Another distraction allows Sabian to tag in after a cheap-shot, and he dropkicks Page to the floor. Another distraction allows Havoc to shove Page into the ring post. And the wrench that Page kicked out of immedaitely has Omega still floored. Sabian hits a field goal kick but Page comes back, attacking both, and makes a tag to the returning Omega.

Kenny hits axe handles to both, then hurricanrana’s both – Havoc has been in the ring for near five minutes and the referee doesn’t care. Kenny slams Havoc, then Sabian before tagging Page. Kitaro Krusher and a shooting star press earns a two-count for the Champs. Havoc gets a saw but Page kicks him off the apron, throws Sabian, then jumps over the ropes onto Havoc.

Big clothesline from Page but Jimmy breaks the pin attempt. Omega tags in but misses a splash. Sabian hits a swinging DDT and tags Havoc. Havoc hits a Death Valley Driver into Page, then Sabian hits a double stomp. Havoc with a DDT to Omega but Page makes the save. Sabian hits a dropkick to the back, then a poisonrana and tags Havoc. Omega hits a V-Trigger and tags Page. The Champs hit some double team moves, finished by The Last Call.

We see a video from earlier today, in which Tully Blanchard gave Shawn Spears a fingerless glove that will improve his career. JR says the black glove is synonymous with great careers…maybe I’m missing something.

Cage attacks his opponent before the bell and rams him into the corner. Cage hits an arm-trap belly-to-belly, then a pumphandle falcon arrow. A big suplex and a buckle bomb, followed by the Drill Claw wins the match.

Taz says that last week Moxley was snickering at them but he needs to take things more seriously or Cage will destroy him as well as take his belt. Moxley makes his entrance and stands across the ring from Cage.

Mox says this is fun and the reason he was smiling last week is because the idea of going to war with an athlete like Cage makes him happy. But to be clear, stepping in the ring with him for his title is no game. Moxley says he can be beat but it will take Cage all night long to do it. Moxley says Cage is a different thing but so is he, and Cage will realise at Fyter Fest that he’s swimming with a different kind of shark. He tells them to remember who they’re talking about when they mention his name.

We see a video of Lance Archer beating someone up at a construction site. He says one loss one stop him and he’s not in AEW to be a spot monkey.

Private Party are drinking backstage when Matt Hardy approaches them, as his Extreme self. Hardy says he enjoyed their match last week and they are the future of tag wrestling. He says their bond reminds him of the Hardy Boyz and he wants to help them in any way he can. They want to form the Hardy Party and he agrees. Hardy walks into the hall and Sammy Guevara is there. Matt says he respects him and walks off.