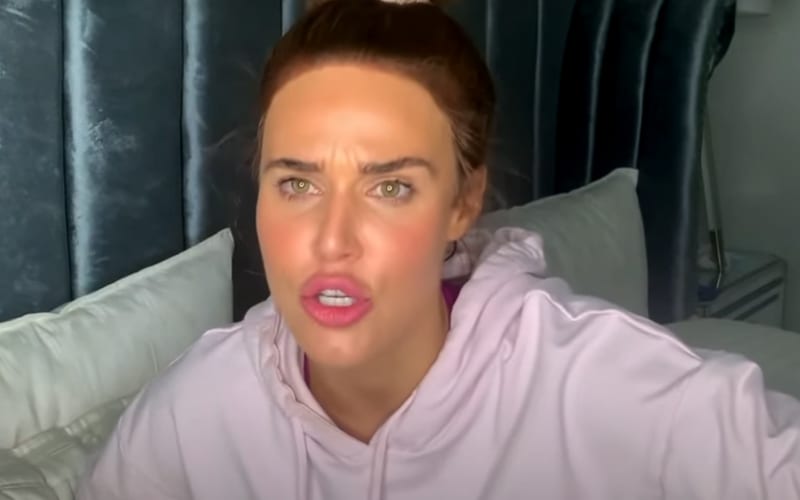 Rusev was released from WWE on April 15th, but his wife Lana is still with the company. Now Lana is speaking out.

Miro has kept busy in the meantime. Click here to watch him unbox his Twitch computer.

Lana dropped a video on YouTube where she addressed her real-life husband’s WWE release. She started out by cutting a promo on him where she brought up some of the things that he did including bribing cops with t-shirts and “singy songy songs.”

“What does the ravishing Russian Lana think about her ex-husband Rusev being fired,” Lana began. “Rusev is not exactly what you think he is. He has manipulated each and every single one of you fans. Why do you think I was taken to jail in Nashville? Why? Why do you think the cops in Nashville took me to jail? Because they were bribed by the Bulgarian Brute Rusev. Rusev Day. He bribed them. He bribed them with a bunch of t-shirts. He bribed them with a bunch of singy songy songs. Rusev finally shoed his true colors. Rusev’s probably celebrating right now.”

Lana then addressed the WWE Universe who might be upset that Rusev was released. She stated that Rusev leaving WWE is just like an actor leaving Grey’s Anatomy, but she understands how frustrating it can be.

“For all you guys crying right now and devastated, look I get it,” Lana said. “I cry when I watch Grey’s Anatomy okay whenever my favorite character is either taken off the show, written off the show, or died on the show. I’m devastated, so I get what the WWE universe is feeling right now. They are devastated that so many of their favorite characters are not going to be on WWE programming anymore, and I know that Rusev, he was the no. 1 trend, or no. 2 trend. No. 2 globally and no. 1 in the USA trends or something crazy, I’m like ugh.”

Then Lana let the kayfabe slide for a minute as she addressed how her husband is really doing. Rusev came to America with a dream to become a pro wrestler and he made it happen. He has determination and Lana briefly discussed that.

“I can assure all of you guys that, not like I’m talking to Rusev every day or something like that, but I can assure you that the man that I found in 2013 and in NXT discovered him. The man that climbed up the ladder in WWE, is made up of a lot.”

Lana and Bobby Lashley are going through a bit of a rough patch on television. The All Mighty could be distancing himself from the Ravishing Russian. Lana isn’t going away because WWE locked her into a five-year contract last year.

Will you miss Rusev in WWE? Sound off in the comments below!

Thanks to Comic Book for the quote