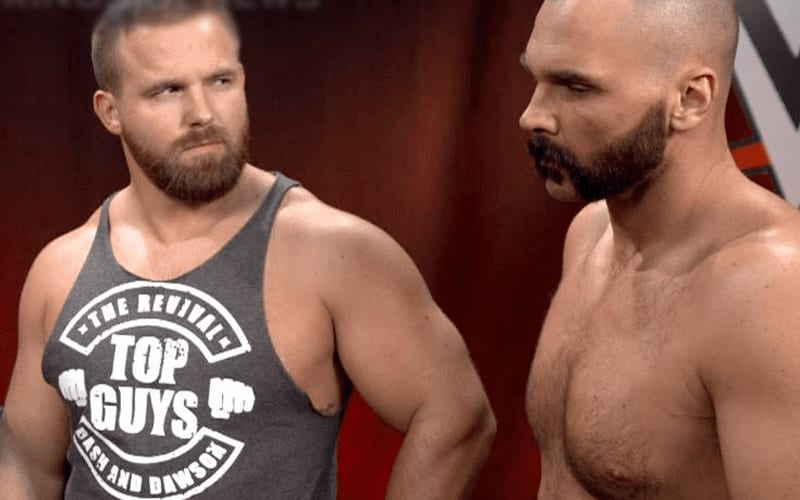 The Revival are no longer with WWE. They wanted out of the company for a while, but those releases came shortly after a global pandemic destroyed life as we know it. It took a bit of bargaining for WWE to let them go as well.

Fightful Select reports that Dax Hardwood (Scott Dawson) had a WWE deal slated to end in April with his tag team partner’s ending in June. Then Vince McMahon’s company intended on keeping Dawson much longer.

WWE used this as leverage to get The Revival to sign over “a number of trademarks” that the Top Guys spent their own time and money acquiring.

They were going to add significant time to Dawson’s (now Harwood) contract that extended him out beyond where Wilder (now Wheeler) was. WWE gave The Revival an out if the duo signed over a number of trademarks that Wheeler and Harwood spent their own money to acquire.

It was said that both sides were working on this deal for a while. It wasn’t noted which copyrights WWE wanted. The former Revival applied for copyrights on “No Flips, Just Fists,” “Top Guys,” “Say Yeah,” and “#FTRKO” through a popular AEW attorney.

WWE recently started the process of opposing The Revival’s copyrights. It appears that now WWE will own the rights to those catchphrases and other intellectual property even though Harwood and Cash Wheeler got to them first and paid for them.

What do you think about this new development to The Revival’s story?! Sound off in the comments below!