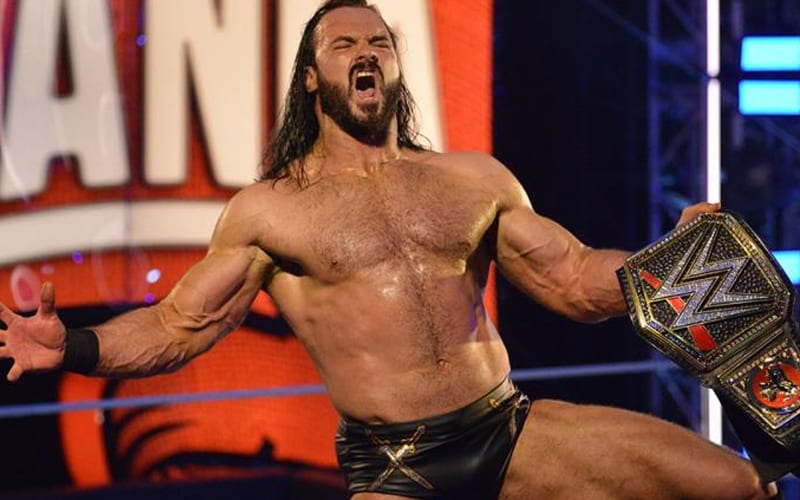 Drew McIntyre won the WWE Title at WrestleMania 36, but the event didn’t air live. Instead, he had to wait a long time before the rest of the world knew what he did in the WWE Performance Center.

While speaking with ESPN, Drew McIntyre revealed how he broke one of WWE’s television rules following his big win. He also went right home and made sure that nobody found his title until the show aired.

He told ESPN that after production wrapped up, he brought the title home and “locked it up in a room until the match aired.” When that moment came, it was like things were happening at that moment.

“Things are not official until they happen. So just like everybody else, I sat on the couch and watched both days of WrestleMania. I enjoyed the show. It took my mind off of things.”

“Watching myself was very crazy, being on the couch — watching it just like everyone else, wondering what was going to happen. I kind of pushed out of my head what had happened.”

The match was real for Drew McIntyre like it was happening in that moment. McIntyre was in his living room next to his wife, but his mind was in the ring.

“I was reacting to it like I was in the match. My wife had to move away from me, because I was darting from side to side with every F-5, with every Claymore. Then came his chance to celebrate.”

“Finally, when I had won the title, I saw the emotion and remembered how real it was to me. In that moment, it was real again as I was watching it. I went upstairs, I opened the door and I took the title out, now that it was official. I had another moment with my wife in the house, and with my family on Zoom. I had my whole family on there.”

Drew McIntyre is carrying the banner for WWE during a historic time in world history. Things are different with zero fans permitted to attend WWE events. Hopefully, Drew McIntyre will get a chance to hear cheering fans again soon.