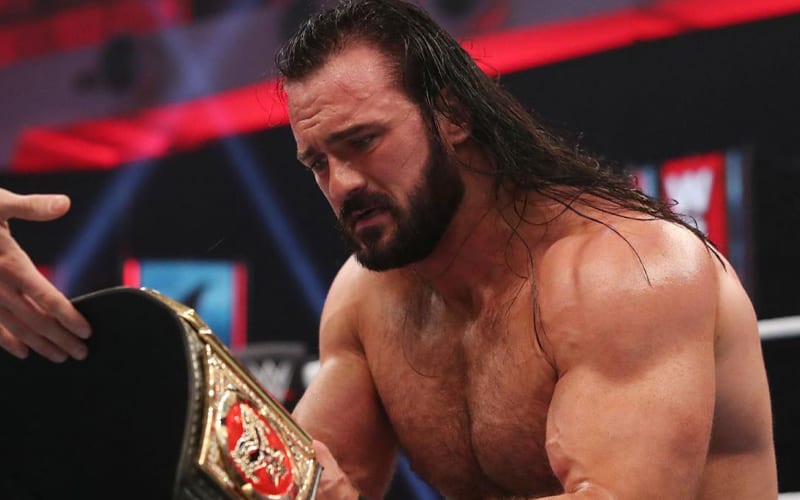 WWE’s 36th WrestleMania event ended with Brock Lesnar losing the WWE Title to Drew McIntyre. The former 3MB member solidified a spot as The Chosen One that Vince McMahon bestowed upon him so long ago.

This was obviously a big deal for Drew McIntyre. Fans or not, he was going to cherish the experience.

As Drew McIntyre spoke to ESPN, he discussed what it was like to win such an important title in front of practically zero people. He had the opportunity to experience a very personal moment in the ring. Then he had to remind himself that this was still WrestleMania 36 and millions of fans would be watching.

“I had a very personal moment with myself — the environment presented that opportunity where instead of the crowd going crazy, and playing off the crowd, I sat and I looked at the title and I was just in my own little moment. And then I remembered, ‘Oh yeah, there’s millions of people watching right now.'”

The new WWE Champion then revealed that he broke one of WWE’s biggest rules after his win. He was in the ring by himself, and he couldn’t help but send a message to the millions of people sitting at home who had so much to do with his success.

“One of our rules in WWE is that you don’t look down the camera and break the fourth wall, like you wouldn’t do in a movie. But I couldn’t help myself. In that moment, I just wanted to thank everybody for supporting me, for supporting WWE during this time and choosing WWE to take your mind off these difficult times. I wanted to let everyone know how I felt, and I’m so glad we kept that in the show. I wasn’t sure if it would be edited, because I really meant it.”

Drew McIntyre won the WWE Title during a very interesting time in the company’s history. It is also a turbulent time for the entire world. We’ll have to see what the future holds for McIntyre as WWE Champion. He certainly started things off in an unconventional way.