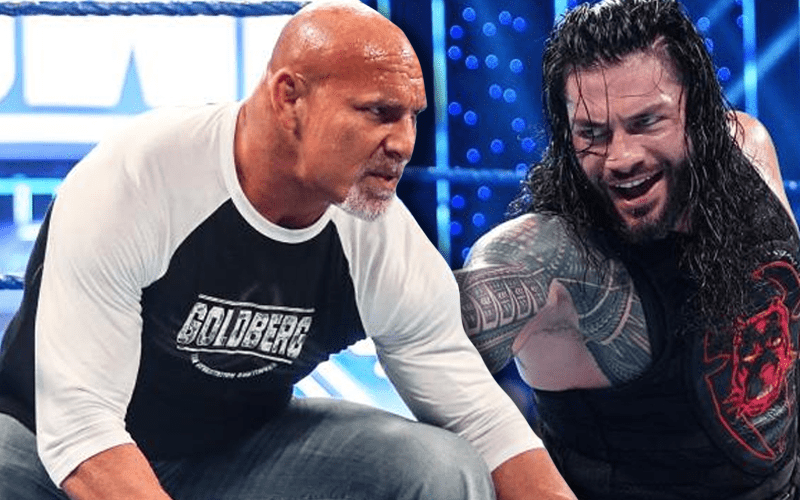 Goldberg returned to WWE and picked up the Universal Title from Bray Wyatt at the Super ShowDown in Saudi Arabia. The next day, Roman Reigns declared that he’s next. There is a reason why Goldberg had such a big smile plastered on his face during that short segment with The Big Dog.

There was also a decent amount of backlash when Goldberg won the title. He has a unique way at looking at his detractors.

While speaking to WWE The Bump, Goldberg revealed how long he’s wanted to get in the ring with Roman Reigns. Apparently, all it took was Goldberg discovering that a Georgia Tech alum was using the spear. In fact, Goldberg credits that match for the reason he returned this time around.

“I came back for a reason and that’s why I came. [Roman Reigns] has been in my sights ever since, you know I heard that I heard he played for Georgia Tech and he does the spear. Period.”

“It doesn’t go any further than that. I love Roman to death. I greatly appreciate what he’s able to do and outside of the ring I’m one of his number one fans. There’s no doubt about it.”

“There’s no animosity there. I have a job to do. Babyface, heel, I don’t give a damn what it is. I’m gonna go out there and I’m gonna rip his face off like I do with everyone else.”

Goldberg also had a lot of fun comparing his spear with Roman Reigns’ more “theatrical” version.

WWE WrestleMania is taking place on April 5th. It’s unclear if Vince McMahon will change his mind about another title match. Goldberg vs Roman Reigns seems to be set in stone.

We will have complete coverage right here at Ringside News on the road to WrestleMania.