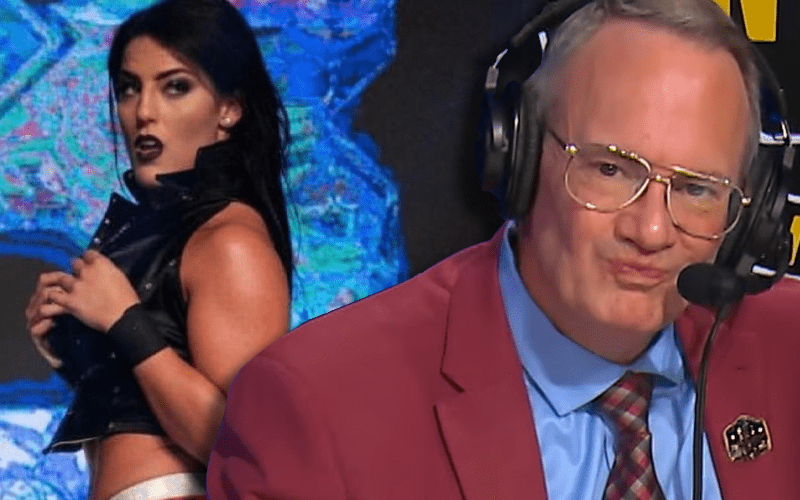 Tessa Blanchard had a lot of people looking at her this weekend. She won the Impact World Title, but one day prior a barrage of stories surfaced about racist and bullying behavior backstage.

Jim Cornette is no stranger to controversy. He commented on Tessa Blanchard’s situation during Cornette’s Drive-Thru and thanked Blanchard for taking the heat off him this weekend.

“Well thank you, Tessa. You’ve taken the heat off me. I have met her several times and can’t think of a more polite or delightful person to talk to. I don’t watch her on Impact, but I love what I’ve seen of her work, but I’m not gonna go that far to watch that f*cking show.”

“The few times that I’ve seen her she’s been an incredible f*cking talent and what intensity she works like a guy which is the ultimate compliment. She’s been nice and polite and bubbly and I don’t know what to think.”

Jim Cornette later commented that “Tully never had that much heat.” He also said that some of the issue might be the fact that Tessa Blanchard is such a great professional wrestler.

“Also, there is an element of I mean she’s so much better than the other girls, you know there could be that as well, but holy sh*t. She got Tully’s people skills, she really did.”

Cornette didn’t fault Impact Wrestling for following through with their booking plans to put the title on Tessa Blanchard. He said Impact Wrestling had no reason to stop her push if they were happy with her.

The controversial manager then commented on how some of the blame could also be contributed to people with “soft feelings.”

“If everyone’s getting their feelings hurt then maybe there are too many people with soft feelings in f*cking wrestling.”

Jim Cornette admitted that the issue could be with Tessa Blanchard since so many people have come forward about it. Still, Impact Wrestling seems to be happy with her so her push continued to capture the title.

“Maybe the problem is Tessa. I’ve said that if she’s insulted and pissed off every girl. As long as you’re happy in your company and can find people willing to work with her that ain’t your f*cking problem. You’re not hiring nice people, you’re hiring talent.”

“I come from an era where the booker could more or less smack you if he wanted to and you were either gonna fight him or get fired or take it. So I’m hard to f*cking impress with ‘She hurt my feelings and bullied me’ — well then f*ckin’ knock her out! What the f*ck? If you’re gonna be wrestler, be wrestlers. If a guy was that upset in a locker room about something that someone had said or done to them then they would f*ckin’ do one thing about it or the other. They’d either do something about it or they would.”

It might be worth noting that a comment was made about Le Rosa Negra being afraid that she would find herself blackballed if she came forward about Blanchard.

You can check out the entirety of Jim Cornette’s thirty-minute discussion about Tessa Blanchard in the video below.