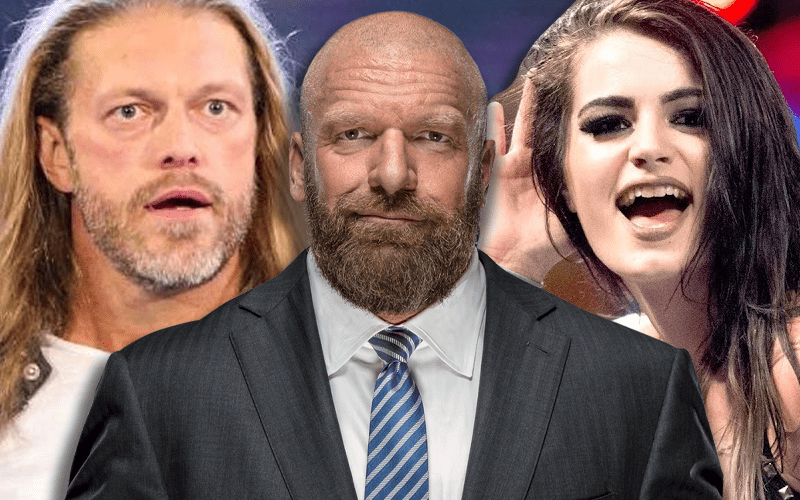 WWE fans will always miss Superstars who can no longer perform in the ring. This is especially true for people like Edge and Paige.

There are some some heavy rumors that Edge is on his way back to the ring. It was previously reported that he is a lock for the Royal Rumble match. Paige is not as likely, but some fans are still holding out hope.

Triple H was recently asked about possible in-ring returns for Edge and Paige as he spoke to Gary Cassidy. He said their returns are up to a lot of things and each is a complicated situation. Life goes on long after WWE careers end and it’s always important to remember that as well.

“With both of them, those would be personal choices for them—Nah, I shouldn’t say that. Personal choice for part of it and then medical choice for the other part of it, right? WWE is at a different level, it’s hard to even put that—there is just no other level with us from a medical oversight standpoint. … Just because you have a doctor every now and then doesn’t mean you have a medical protocol. For us there are certain parameters when we believe that it’s not in your best interest, we put the human being first, their health, and their long-term health.”

“Life goes on for a long time after this ends. Especially now—the style and physicality has increased dramatically. So, when you get to a place where at some point we’re telling you, ‘Medially, not in your best interest. It’s a medical decision, if our medical experts say they believe that this person has done whatever to rehab their situation and have done all of that, and are now safe to get back into the ring, we allow it.”

We’ll have to see if Edge and Paige do make their returns to the ring. It would certainly be an exciting addition to 2020 and make the beginning of this new decade even more memorable.