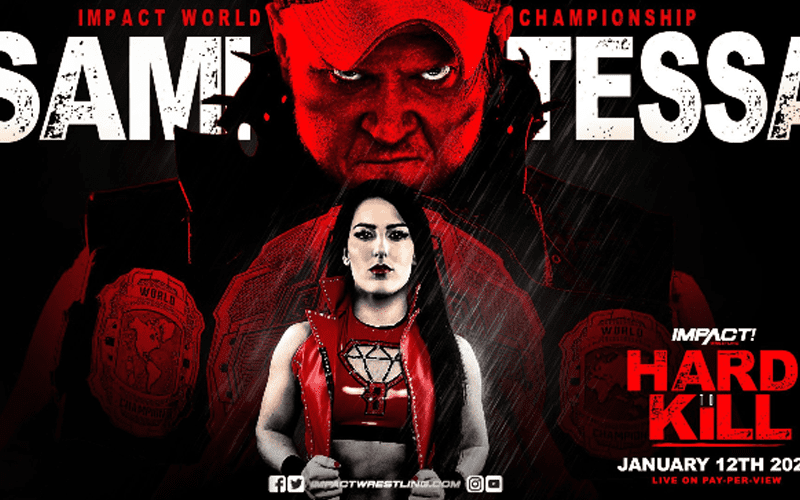 Welcome to Ringside News’ live coverage of Impact Wrestling’s Hard To Kill pay-per-view. The show will start at 8:00 PM EST. Keep refreshing and we’ll include highlights throughout the night.

Tessa Blanchard will face Sami Callihan for the Impact Wrestling Title. This could result in Blanchard becoming the first female to hold that belt. Yesterday’s onslaught of allegations about Blanchard’s behavior caused her to miss yesterday’s media junket.

The X-Division Title just got a face lift and it will be on the line tonight as Ace Austin defends his title against Trey. The North vs. Willie Mack and Rich Swann might not happen as Swann is now injured.

You can check out the complete card below. We’ll kick off the results after the show gets going.

The North vs. Willie Mack and Rich Swann

Click here to see the opening video package for Hard To Kill.

They fought until Fulton went to the flood and Shamrock went for a dive. Fulton caught him and then Shamrock slammed Fulton to the cement floor. Shamrock kept laying in the knees and Jake Crist got some too.

Crist got another right hand on the apron and then oVe got tossed out.

Shamrock started taking a beating for a bit with a few bumps. Shamrock went for a kimura lock and locked it in. Fulton started selling his arm big time.

Shamrock didn’t want to keep fighting because he already broke Madman’s shoulder. Then Ken locked on another arm submission and he submitted verbally.

This was all about Trey’s mama. Ace Austin wanted to get with her and Trey’s not about that. She was sitting at ringside.

Trey started aggressively and Austin ran. Trey didn’t let up on Ace at all until Ace ducked a dive and started some offense. Then Trey hit a dive to the outside.

Ace continued the beating in the ring for a bit. He focused on Trey’s leg a lot. Then he cut Trey between the fingers with his playing card.

Trey rallied, but Ace nailed a kick to slow him down. Soon Trey had Austin in a stretching submission hold for a second and hit a flatliner off the ropes for a two count.

Trey hit a 6-1-9 and climbed up top, but Austin racked him with the ropes. Austin hit his finisher and won.

Trey beat down Ace after the match for asking his mom for a kiss.

ODB was very rough and Taya powdered out before ODB eventually got dropkicked off the apron by Valkyrie. Then Taya and Grace fought for a bit. Grace hit a powerslam and got fired up before hitting a dive.

ODB hit a fallaway slam on Grace on the outside, but she hit her head on the ramp. Taya then took control of ODB for a bit. Then Grace got in and wrestled with Taya for a while after ODB left the ring.

ODB hit a bulldog on Taya off the second rope while she had Grace in a hold. Grace tried to work on Taya, but ODB wouldn’t let anyone get the pin. Grace sent ODB to the mat from the top and hit a senton, but Taya broke up the pin.

ODB hit a samoan drop and then Grace splashed them both on the pinfall attempt. Grace hit the Grace Driver on ODB, but Bravo distracted the referee. Then Taya stole the pinfall.