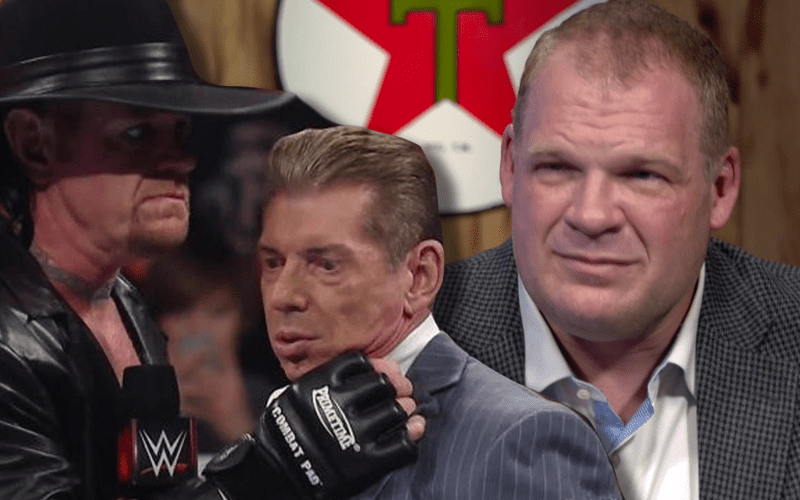 The Undertaker and Kane aren’t really brothers, but they have the kind of bond that siblings share. The Devil’s Favorite Demon commented on the Broken Skull Sessions about how Taker had a “come to Jesus moment” to set him straight even before he was given the Kane persona.

Kane went on to later discuss how The Undertaker went above and beyond what he needed to. They often discuss things and Kane mentioned how he brought something up with Undertaker that he planned to discuss with Vince McMahon.

Before Kane could even get to Vince McMahon, The Undertaker had already spoken to The Chairman about his brother’s storyline.

“I remember one time I was just having some issues with booking and stuff. I talked to Taker first and it didn’t even involve him. This was just my own thing, I just needed some guidance and I go and talk to Vince about it and he’s like, ‘Yeah I talked to The Undertaker about this earlier and he mentioned this to me. I think he worries about you more than he does himself.”

“That’s just how he’s been my entire career. Still to this day if I need something I hope he’ll feel the same way. I’ll call him.”

Vince McMahon obviously noticed how much The Undertaker had Kane’s back. That probably did Kane a lot of good through the years as well.

The Mayor Of Knox County, Tennessee wasn’t sure if the Kane gimmick would even last past his WrestleMania program with The Dead Man. Thanks to The Undertaker’s support Kane experienced career longevity with that gimmick that few Superstars achieve.