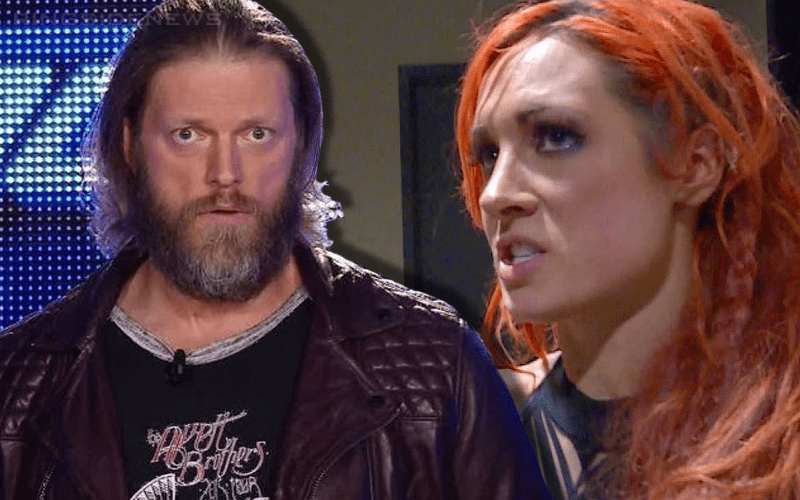 Becky Lynch will take shots at anyone she likes because she’s The Man and is taking on all challengers. It doesn’t matter if it’s a woman or a man or even a WWE Hall Of Famer because Lynch will fight them all.

Recently the IWC has been treated to a little online battle between Edge and Becky Lynch. That online feud hasn’t cooled down in the slightest as they threw even more shots at each other on Saturday afternoon.

Becky Lynch fired back at Edge after he took a big shot at her for tanking television ratings. Needless to say, she didn’t like that too much as she also brought Beth Phoenix back into the conversation.

“Got a minute here…let see Edgies reply… oh, “ThE RatINGs BrO” retort to one of the few who gains audience on TV? Weird, must be talking about Beth. Wonder is he getting his women mixed up as he’s been known to do when there’s a redheaded wrestler involved.

Edge called out the fact that it took so long for Becky Lynch to reply by making a joke about her writers. Whoever wrote that comeback for Becky Lynch certainly could use some work if you ask Edge.

Took you this long to find your writer to write this for you? He needs work. Ok trust me we won’t confuse your dumpster fire hair color with the “other redhead”. And be careful you may get Beth back and she may knock you back to your riverdance days Lasskicker. Now quit obsessing

Becky Lynch replied back by saying that she’s been trying to fight Beth Phoenix this whole time and not Edge. Then she suggested that The Rated R Superstar go back to fabricating more cute stories about his kids.

Dude, why didn’t you tag me on this? Also, I’ve been trying to fight your wife this whole time. So you go back to Tweeting things your daughter didn’t say, and I’ll go and beat the one adult in your house that isn’t made of glass.

Edge came back with his own reply. Needless to say, he wasn’t very amused with Becky Lynch’s comeback that time either. He also accused her of spending too much time “stanning” on him.

You actually made Jersey smell worse stinking up the Mania main event like you did. You should focus on improving that instead of stanning me kiddo. But it could work out for ya, maybe Beth can carry you to a decent match @BeckyLynchWWE

Ok while you scramble with your ghost writer to come up with a comeback and think of the next wrestler you’ll rip off Stone Cold Stan Austin, I’m gonna go shine one of my 31 championships. Good bye @BeckyLynchWWE One Belt

These two are very entertaining on social media. It’s too bad they can’t get something like this going in the ring. Perhaps they are building toward something down the line with Beth Phoenix and Becky Lynch, but The Man has Lacey Evans to deal with at Stomping Grounds first..

One thing we know for sure is that if WWE had an issue with this back and forth between Edge and Becky Lynch then it most likely wouldn’t be happening.