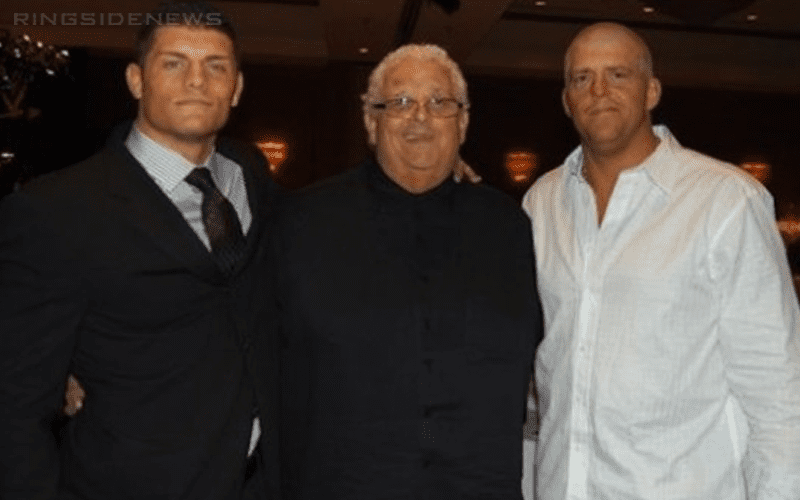 Dustin Rhodes and Cody Rhodes threw down at AEW Double Or Nothing and it was a match that will live on forever as part of AEW’s first-ever pay-per-view event. Their father Dusty Rhodes was undoubtedly looking down during that bloody battle and was very proud of his boys.

While speaking to Talk Is Jericho, Dustin Rhodes revealed how the blood in that match was actually a bit scary for a moment. He didn’t mean to blade that deep — even though he kayfabe credited the crimson mask to his sister-in-law. He also revealed that he will never wrestle his brother Cody again.

Dusty Rhodes provided his son Dustin with some valuable advice after they were able to patch things up, but one things he said stands out for the former Goldust and that’s to just “keep stepping.”

The Natural revealed that he called his father during one of the darkest parts of his own life when he was in the depths of addiction. This is when Dusty Rhodes stepped up and helped save his son in a lot of ways.

“It necessarily wasn’t about the business, it was just in life, you know? I went through a thing when him and I were having that difficult time. I went through drug and alcohol addiction that was pretty heavy. I almost died, I was just about as bad as you could possibly imagine. And I’d had enough, and I don’t know if that’s some kind of spiritual awakening or whatever, or rock bottom of a three-day bender.

“It was like, I’d had enough and I called him in the middle of the night. I said, ‘Man Pops, I want — I need to get help.’ And I’m squalling and I’m crying, drunk and f*cked up out of my mind. He gets me into the Wellness Program, and to rehab, and I went and eleven years later I’m clean and sober. But it’s like, every single day from that point I got out of rehab, he would call me. And he was like, ‘You need to keep working your program, Dus. Keep working your program, and keep steppin.’ ‘Keep steppin’ is a big thing for me that he said that really stuck out, that he said every single day to me. And I use it all the time now on social media, ‘Keep steppin.’”

It is hard to imagine what would have happened if Dustin Rhodes hadn’t picked up that phone and called for help. Now Dustin can keep steppin’ with AEW.