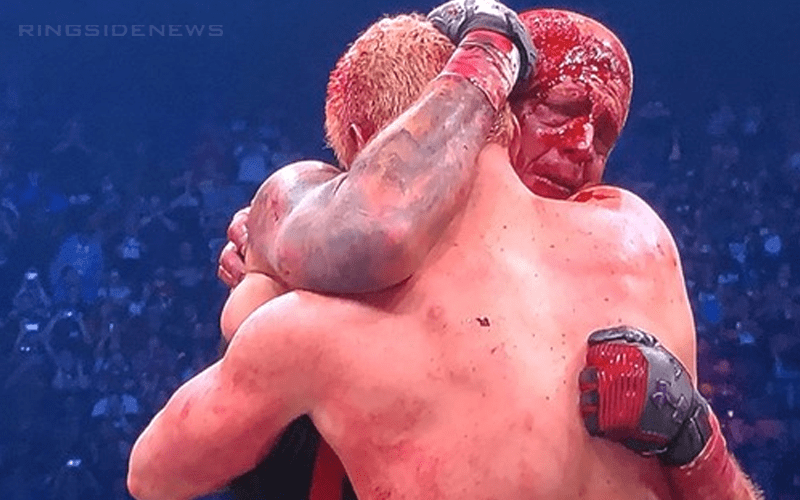 AEW Double Or Nothing included one match that stole the show for a lot of people. Dustin Rhodes and Cody Rhodes took each other to the limit both physically and emotionally. By the time their match was over, they had produced the only 5-star contest of the night.

Dustin Rhodes bladed during that match which is the practice of cutting oneself so blood is included in the match. He had to admit that all the blood scared him a little bit when it kept coming, but it is hard to imagine how that match would have been without the added color.

While speaking to Talk Is Jericho, Dustin Rhodes re-lived that now-famous match where he explained that although there were doubters — the Rhodes boys delivered. However, he is not interested in locking up with his brother Cody again after their war in Las Vegas.

“Dad never really said anything. He wasn’t against it. He wasn’t necessarily for it. Dad was reserved in his thoughts in this and he got behind whatever his sons wanted to do. I appreciate that, but I heard it from so many of my peers that I learned from them saying, ‘Man, it’s just no good it will not work, it will not work.’ It’s frustrating to keep hearing that over and over. I think we proved everybody wrong. It worked, it worked.”

“Now I will say this right now. I will never ever face my brother again, ever. I cannot top that. That was like tops for me. I wouldn’t want to step in the ring with him again ever against him.”

The Rhodes Brothers left it all in the ring at AEW Double Or Nothing and both Dustin and Cody were crying as they hugged in the middle of an AEW ring covered in Dustin’s blood.

Cody might not admit to crying, but Dustin later told Chris Jericho that he could feel his brother’s body sobbing as the two embraced.

One thing we know for sure is that we won’t be seeing another match between The American Nightmare and The Natural because there is nowhere else they can take that story between Dusty’s boys.