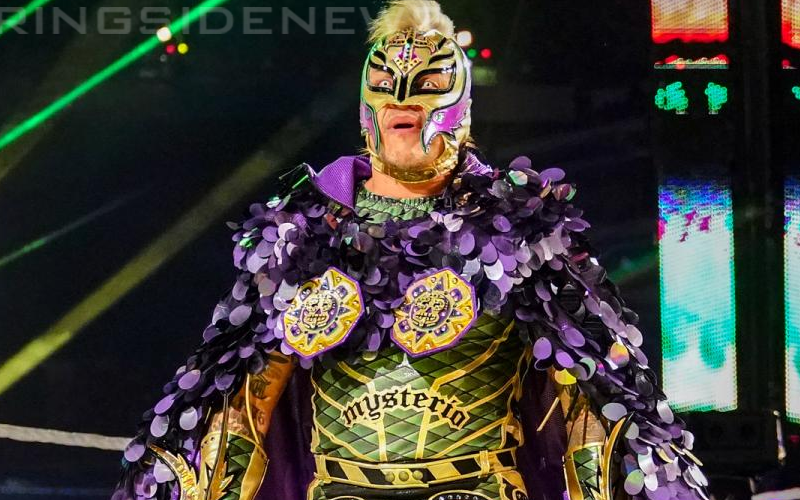 Rey Mysterio’s mask is famous and could be the GMOAT (Greatest Mask Of All Time) as they like to promote on his merchandise, but nothing can last forever.

Mysterio’s son Dominick is now a part of WWE television. There have also been some serious rumors that Dominick inked some kind of a deal with WWE already. The fact is that Mysterio’s son is not the boy he used to be when Eddie Guerrero was saying, “I’m your Papi.” Because he’s had pro wrestling training and could be looking to carry on his father’s legacy in a big way.

The Gorilla Position noted that Mysterio’s plan for his son might be to eventually hand over his own mask. This could see a bare-faced Rey Mysterio give over his famous mask to his own son after an emotional match in the squared circle.

“Apparently what Rey wants is to pass the mask on. And that’s what he said to WWE that he wants eventually for Dominick to wear the mask. He wants a match with Dominick where he loses and he passes the mask on.”

Rey Mysterio is set to face Samoa Joe at Money In The Bank for the WWE United States Title. Mysterio’s career isn’t over yet, but he also stated that his days in the ring are numbered.

If it is indeed Mysterio’s plan to hand over his famous mask to Dominick then it could not only be a monumental moment in pro wrestling history, but it would also give Dominick a lot to live up to.

Thanks to WrestleTalk for the quote