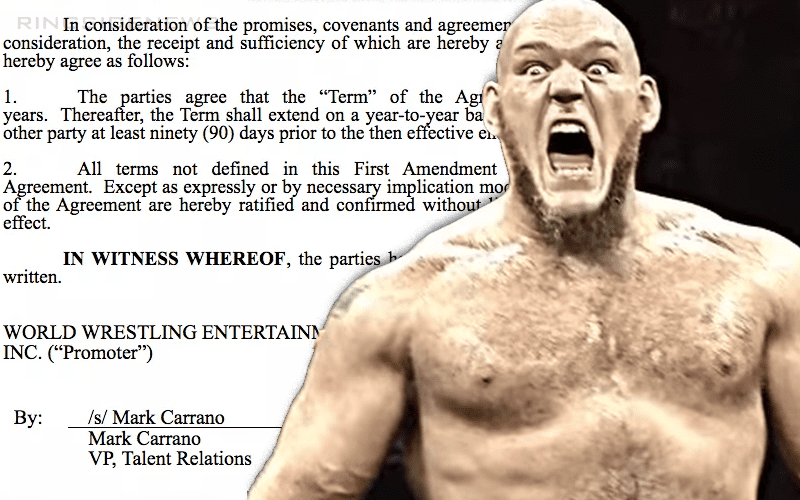 Lars Sullivan said a lot of things on a bodybuilding message board that do not reflect who he is as a person today. Reports came out that he has apologized to the roster and really regrets what he said during his days as an internet troll, however, he was still fined $100,000 for those past offenses.

WWE has specific wording in their contracts which allows the company to fine Superstars for any moral offenses. This is not unique as several sporting organization have the same kind of clause.

The Wrestling Observer Newsletter included the exact wording of the morality clause found in Superstar contracts in the latest issue.

“Wrestler shall act at all times with due regard to public morals and conventions during the term of this agreement. If wrestler shall have committed or shall commit any act or do anything that is or shall be an offense or violation involving moral turpitude under federal, state or local laws, or which brings wrestler into public disrepute, contempt, scandal or ridicule, or which insults or offends the community or any employee, agent or affiliate of promoter or which injures wrestlers’ reputation in promoter’s sole judgment, or diminishes the value of wrestler’s professional wrestling services to the public or promoter, then at the time of any such act, or any time after promoter learns of any such act, promoter shall have the right to fine wrestler in an amount to be determined by promoter; and promoter shall have the right to immediately suspend wrestler and/or terminate this agreement pursuant to Section 12.”

WWE also has the right to use their judgement in these matters. They had hoped that the Lars Sullivan situation would blow over eventually, but fans contacted advertisers and this became an issue. Therefore, action needed to be taken.