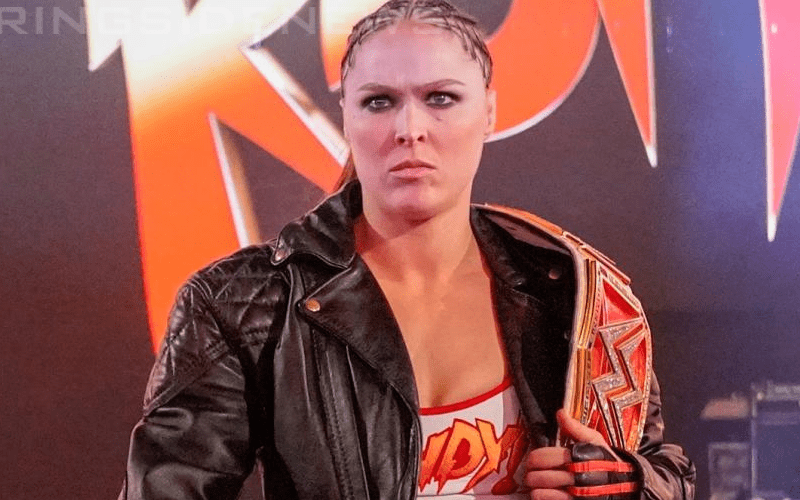 Ronda Rousey fulfilled her one year as a full-time WWE Superstar and now she is on an “impregnation vacation.” It is unclear when she will be making a return, but it was much easier for her than MMA ever was.

As Rousey spoke to UFC’s Megan Olivi she discussed the differences between preparing for a fight and wrestling for WWE. The Baddest Woman On The Planet also admitted to getting “the easy version” of WWE seeing how she didn’t have to make all of the road dates as a full-time Superstar.

“It’s physical in a different way, the stress from fighting is much, much more,” Rousey said. “The training camp, the weeks leading up to it, the press, and going to sleep every night thinking about it. That’s the real wear and tear, not so much the physical part of it. With fights you assume, ‘Okay, I’ll give myself at least a month to recover after that.’ It’s a peaking system, you allow yourself to peak and crash. With WWE it’s just a grind and it’s non-stop, I did the easy version, everybody else does 300 days a year. Their bodies don’t get to rest as much as ours in MMA, but their minds get to rest a lot more in MMA I feel like. There’s no pressure on anything.”

Ronda Rousey’s time in WWE was very successful. She was able to help elevate the women’s division to the point where after one year with the company WrestleMania featured an all-female main event. Now it is her time to decide what is next for her life.

WWE could certainly use Ronda Rousey’s return and they are really missing having her around. Not only was Rousey respectful to the business, but she also showed up and gave it her all every time. It still apparently didn’t hold a candle to the stress of being in the UFC.