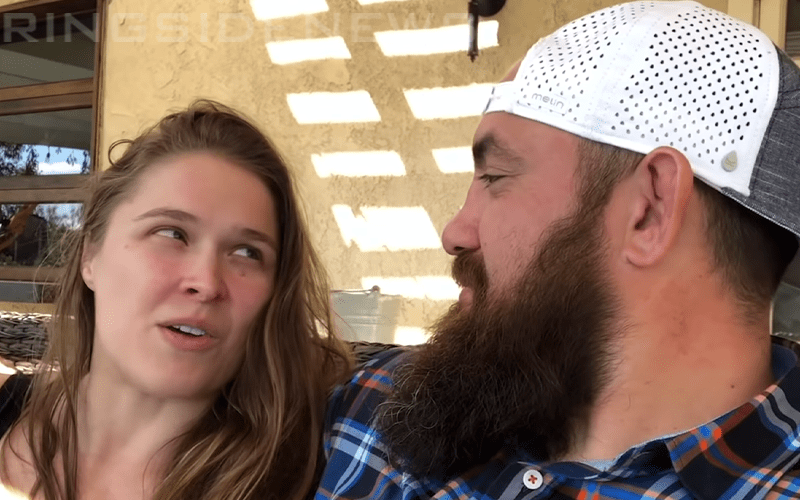 Ronda Rousey is currently on an “impregnation vacation” from WWE. She wants to have a baby with Travis Browne and she obviously can’t be on the road with WWE for that the happen.

Rousey only agreed to one year as a full-time WWE Superstar which she fulfilled without an issue. After WrestleMania 35 she started her hiatus and is only obligated to represent the company for the next two years.

Ronda said that originally she only wanted to work with WWE from WrestleMania to November because they wanted to start a family. However, WWE obviously got her to stick around until April 7th. Now Rousey is recuperating from a busted hand that required surgery, but now she is also ready to get pregnant.

On the most recent YouTube update from the former Raw Women’s Champion, Rousey admitted that once she has a baby with Browne she doesn’t know how she will feel about coming back.

“As for WWE plans in the future, we want to have a baby first. I don’t know what it’s like to have a baby. I could look down at this beautiful child and be like ‘f*ck everything I don’t care about anything else.’”

“Or I could be like my mom who she trained when she was eight months pregnant and won the U.S. Open six weeks after giving birth.”

Only time will tell how soon Ronda Rousey will be able to make a return to WWE. She could be the great exception of a Superstar returning incredibly early after having a child because of who she is and what she is capable of. Because Rousey has trained her entire life with an incredible focus for the most part.

WWE is obviously going to welcome Rousey back whenever she wants to return. So we could possibly expect some big plans to be changed around whenever Ronda Rousey decides it is time. The biggest question is how much Ronda Rousey would want to work for WWE after giving birth.

Quotes thanks to Wrestling News