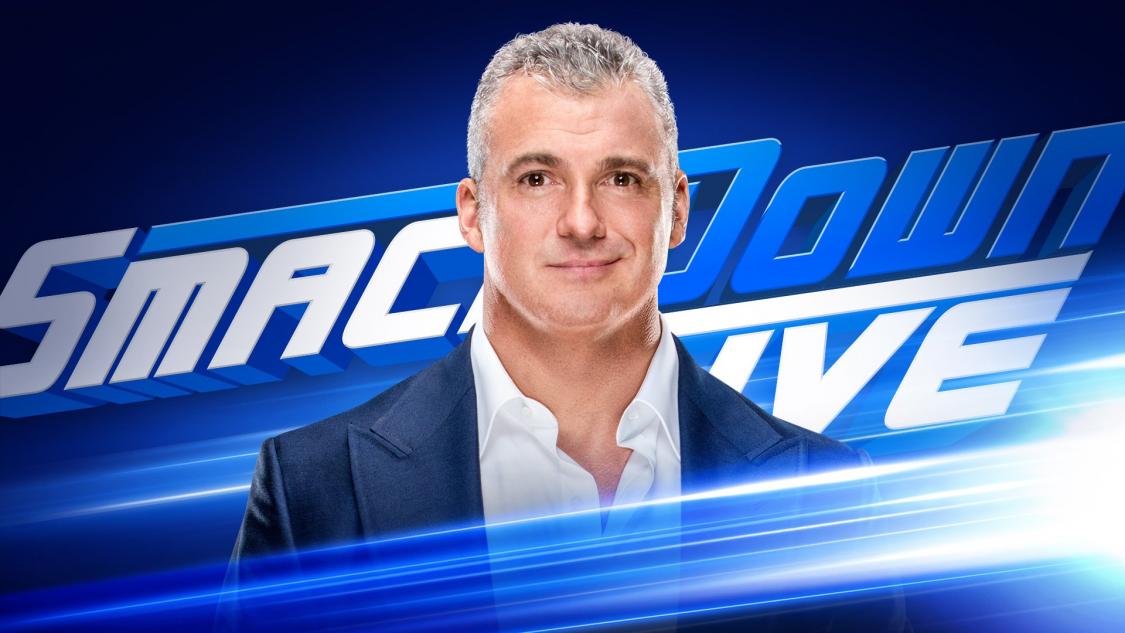 It is time for Ringside News’ SmackDown Live results. Please keep checking back and refreshing the page once the show kicks off at 8:00 PM

Tonight’s SmackDown Live show should be interesting especially after Vince McMahon invented the Wild Card Rule last night on RAW. Now we don’t know who will show up, although we know who won’t because some top names are already on their way to Europe.

Kevin Owens will also have some explaining to do as he continues his feud with Kofi Kingston. Ali and Andrade are also set to have a match and that one could really deliver if WWE lets them tell a long enough story.

There will also be a six-woman tag team match with Bayley, Ember Moon, and Carmella facing Charlotte Flair, Mandy Rose, and Sonya Deville.

All that and more is expected for the blue brand’s show tonight. So please check back when the show start at 8:00 PM EST and we’ll get this thing going.

SmackDown opened with a RAW Superstar this week – AJ Styles.

He said that he missed the blue brand even though it’s only been two weeks. He brought up the Wild Card Rule and how there are 4 Superstars allowed per week. Neat rule, Vince.

Styles said he’s sure as hell going to be the first one to do it.

Then Sami Zayn came out after being MURDERED VIA DUMPSTER LAST NIGHT ON RAW!

Zayn called the Louisville crowd, “Kentucky fried hillbillies.” He said that Styles’ ego has spiraled out of control. Then Styles made a joke about how Zayn smells bad thanks to the dumpster he jumped out of.

Styles told Zayn to take a shower and “take a shower” chants broke out. Then Kofi Kingston and Xavier Woods came out next. This Wild Card Rule has to make Woods and his Up Up Down Down channel very happy.

Kofi asked what AJ Styles was doing on SmackDown Live tonight. AJ asked if he saw him on RAW last night so he figured he’d come to the blue team and return the favor. Woods quotes Ice Cube “check yourself before you wreck yourself,” and then Kofi said he’s the champ now.

Sami told Kofi that he can’t be thinking about giving Styles a WWE Title match tonight. Then he said that “these people are not happy for you.” He said that Kofi got a “taste of their affection” and it’s not authentic. If anyone deserves a title shot tonight it’s him. So Zayn wants the mach.

Kofi stopped him and asked “seriously Sam, what is that smell?” Then the “take a shower” chants started again. Woods said Zayn smells like his “10th grade sock drawer.”

Kingston said he took on Bryan last night to prove what happened at Mania was not a fluke. He’s a fighting champion and he’s going to face either Sami and AJ. “Triple threat” chants broke out and then they did the WWE World Heavyweight Champion hip swivel.

We still don’t know who’s facing Kofi, but it’ll be someone.

Kevin Owens cut a promo saying it’s his birthday (it is) so he’s getting the day off. He’s still winning the WWE Title at MITB.

This battle between two talented Superstars who used to have longer names is actually a first-time match-up on WWE television for once.

They confirmed that Kofi will be defending the title against both Sami and AJ.

They aired a very nice ALI promo about Money In The Bank.

Those two wrestled for a bit, but Randy Orton soon jumped in and hit an RKO outa nowhere. This called for a DQ.

ALI tried to fight back, but Orton eventually hit an RKO on him. The entire match ended with Randy Orton in the ring looking up at the MITB briefcase.

McMahon took some time to talk about how The Miz brutally attacked him last night in cowardly fashion. Then he insulted the Kentucky crowd for not understanding big words.

Shane said that he will win at Money In The Bank. Then he got down to business.

Shane McMahon credited Lars Sullivan for injuring Jeff Hardy once again even though he didn’t do it. Then McMahon wondered who would be worthy to be the new champions.

Then he said he decided what to do and introduced Daniel Bryan and Rowan. The Usos came out next and said that they needed to earn those titles. The Usos are here as a part of the Wild Card Rule.

Then The Usos called Bryan and Rowan out for a tag team title match. Shane McMahon said he will enjoy watching this and the match will happen right now. He’ll also enjoy watching the blue brand boys kick the twins back to RAW.

Bryan took some damage from the Usos thanks to some double team moves before tagging Rowan who nailed Jimmy with a hard boot, a slam, and a splash for a two count.

Bryan took the tag back in and continued taking the pain to Jimmy with a variety of stretching holds. Rowan took the tag and Jimmy fought back, but Jey was knocked off the rope and Jimmy took out Bryan before getting absolutely flattened by Rowan.

They continued on and Bryan latched on a LaBell Lock on Jimmy off of a splash. Jimmy got to the ropes, but Bryan pulled him back in. Then Jimmy hit a superkick as they both went down.

Jimmy and Jey started Superkicking Rowan and Jey hit a dive on Bryan. Jey hit a splash on Rowan and got a close two count.

Jey hit Bryan on the apron and then Rowan went outside too. Then the Usos hit double dive, but Rowan caught them. Bryan hit a running knee and then Jey Superkicked Bryan and Rowan.

Suddenly, Rowan hit the Iron Claw Slam for the win.