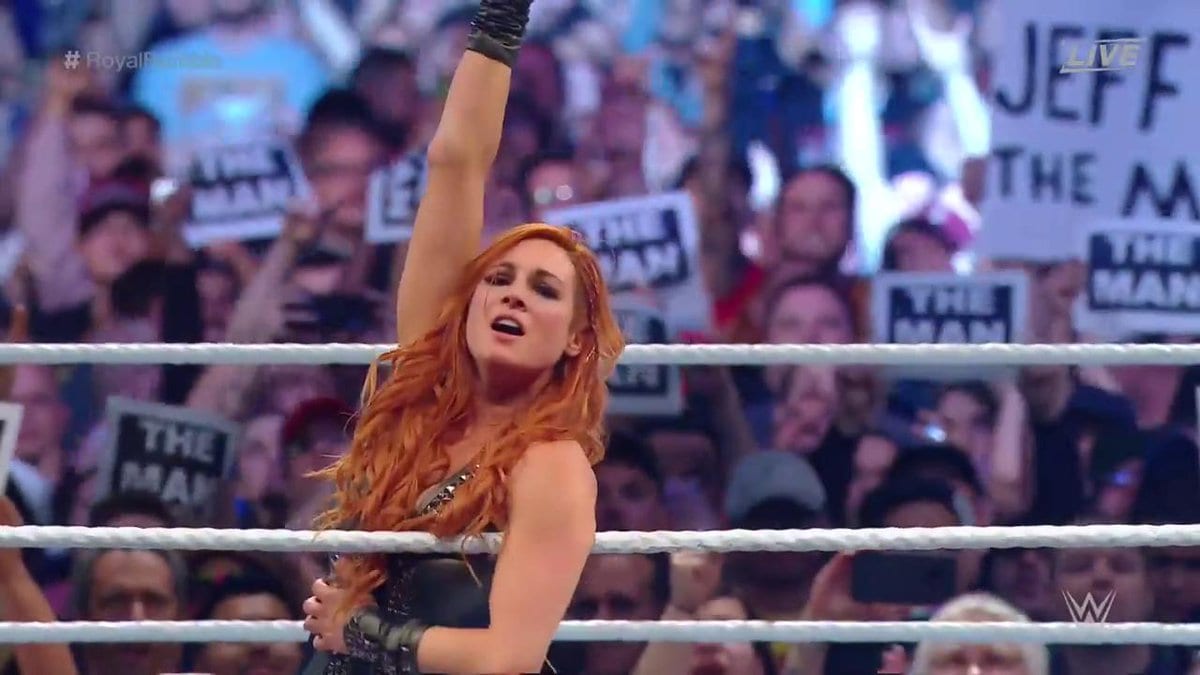 Becky Lynch’s music was the first to break out during the actual Royal Rumble pay-per-view to pop the crowd. Her mission was to re-capture the SmackDown Women’s Title and she looked concentrated on accomplishing that goal.

Asuka won the Royal Rumble match last year and it took nearly one year’s time for her to get a title. She had to face The Man to keep her title. Becky Lynch encouraged Asuka to fight her and she did so. However, Becky seemed to have an answer for every one of Asuka’s advances.

Eventually, Asuka gained control as she pummeled Lynch outside the ring, but then Lynch returned fire with a Becksploder suplex to the barricade. The action carried on in the ring and Lynch tried to punish Asuka’s arm to soften her up for the Dis-Arm Her, but The Empress Of Tomorrow kept Lynch off of her with some kicks.

This seemed to be Lynch’s match to lose as she revered everything Asuka seemed to throw at her. Then Asuka landed a knee to The Man’s face off of a diving clothesline attempt.

These two fought on and Lynch experienced an unfortunate wardrobe malfunction in the process causing WWE to cut the video feed.

Asuka kicked out after a top rope Becksploder Suplex and then they did each other’s submission holds. Finally, Becky Lynch latched on the Dis-Arm Her and then Asuka was able to turn it into a two count.

Asuka latched on the Asuka Lock and then she modified it to increase the torque. This gave Becky Lynch no choice but to tap out.

If you would like a full run-down of the Women’s Royal Rumble match you can check out our full results here.

Lana took a bump earlier in the night and she came out as the #28th entry, but she couldn’t make it to the ring. She sold her injured ankle and stopped halfway down the ramp. Then Nia Jax entered at #29 and took Lana out for real with a series of big boots just because she could.

She slid in and joined the match at that point and they carried on with the Women’s Royal Rumble match. Then Carmella entered at #30 because she earned that spot by winning the second season of Mixed Match Challenge. As Mella ran to the ring, she sprinted past the medical staff still attending to Lana.

Then Becky Lynch came down and demanded that she be inserted into the match. Finally, Fit Finlay allowed her to enter the match in Lana’s place. Nia Jax was shocked and the crowd went wild. Nia is the woman who took Lynch out of action and cost her a Survivor Series match against Ronda Rousey. Needless to say, The Man had her revenge.

The final three in the match came down to Charlotte Flair, Nia Jax, and Becky Lynch after Bayley was sent over the top rope. The three squared off and things got intense.

Then Charlotte picked up Nax again and Becky Lynch pulled her off the apron after she escaped through the middle rope after Jax charged the corner.

The final two came down to Charlotte Flair and Becky Lynch. Suddenly, Nia shoved Lynch off of the steps and she twisted her knee. Lynch was still in the match and Flair taunted her from inside the ring as the referees looked at The Man’s knee.

Becky struggled to stand, but she got back in the ring. She charged at Flair, but her knee gave out. She yelled that “this is my time” so Flair charged her knee and started destroying Lynch’s knee with a variety of moves.

Flair got Lynch in the tree of woe and then she tried to throw her old friend over the rope. Lynch came back with a kick and shoved Flair over the top, but Flair took out her leg again and got back in.

Finally, Becky Lynch was able to coax Flair to charge her again and she sent Flair over the top rope to win the 2019 Royal Rumble match.