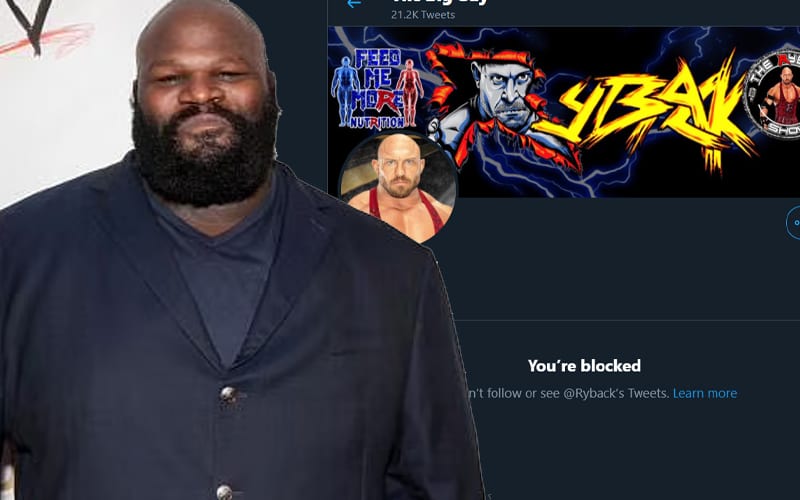 Ryback made disparaging comments against title belts in pro wrestling and this sparked a huge controversy. The Big Guy was verbally shut down by Jim Cornette, and Mark Henry soon followed. Now Ryback has his target set on The World’s Strongest Man.

Mark Henry unleashed on Ryback for his comments. He even called out The Big Guy for being dangerous in the ring.

Ryback replied to a fan asking for a comment. He called Mark Henry’s reaction “a paid advertisement” from WWE. Then he admitted to blocking Mark Henry on Twitter.

It was a paid advertisement 100% and I will not resort to hate towards Mark, but he is now blocked. He knows full well the lies he told, but that’s what he does.

Ryback later tweeted out a thank you to his fans for their “love and support against Mark Henry.” This was followed by a comment about seeing where things stand in a decade. He called himself “Skippy Sheffield, his old Nexus name, because that is how Henry referenced him.

Thank you for the love and support against @themarkhenry We will see where things stand in the next 10-15 years and it won’t be for @wwe Mark has been a paid puppet for a long time and I will continue to speak out against @wwe evil ways. -Skippy Sheffield

Ryback is certainly creating a lot of attention for himself, but it might not be the best kind. He claims to be ready for a television return of some kind, but the big question is where he might receive that opportunity. He probably lost Mark Henry as a reference through this situation.